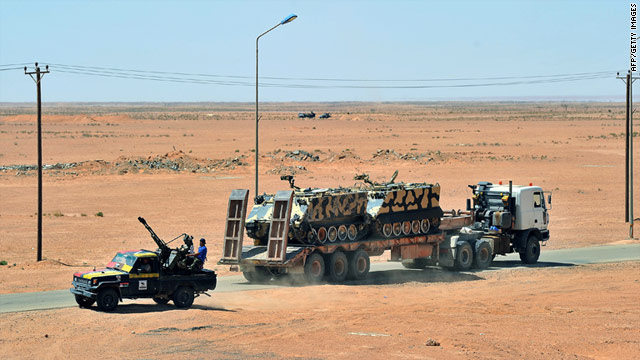 Between Bani Walid And Misrata, Libya (CNN) -- Ousted Libyan leader Moammar Gadhafi has been surrounded and has no way of leaving the area, Anees al-Sharif, a spokesman for the Tripoli Military Council, told CNN on Wednesday.

He said that he could not comment on where Gadhafi is, but that rebel fighters were closing in. The Tripoli council is part of the rebel coalition known as the National Transitional Council.

Abdallah Kenshil, chief negotiator for the NTC, said he could confirm that two of Gadhafi's sons, Saif al-Islam and Mutassim, had been seen in Bani Walid.

U.S. Defense Secretary Leon Panetta said Tuesday that officials believe Gadhafi is on the run. "I don't have any information as to exactly where he's located," he said.

"NATO will be defeated by force because its financial ability is not enough to proceed with the shelling," said the speaker, insisting he is in Libya and will not leave.

"They claimed I left to Niger so they can weaken you and destroy your morale," the man said, adding such reports were "lies."

Two Libyan convoys passed through Niger this week, officials in that country said. The U.S. State Department said it viewed the two sets of vehicles as parts of a single convoy -- and that Gadhafi is not believed to be on it.

Kenshil told CNN on Wednesday that the rebel fighters had started advancing on Bani Walid, one of the last Gadhafi loyalist strongholds, Wednesday night but did not give further information.

Earlier Wednesday, trucks armed with anti-aircraft guns and rocket launchers pulled into a forward operating base 30 kilometers (18½ miles) southwest of the Libyan coastal city of Misrata.

The fighting force known as the Victory Unit was back from its patrol of the desert landscape separating the Gadhafi stronghold of Bani Walid and rebel city of Misrata.

The 70-kilometer (43½-mile) buffer zone has been quiet for the past two weeks as a cease-fire was declared while tribal leaders from Bani Walid and representatives from the National Transitional Council negotiate the city's surrender.

"We don't want more bloodshed," said Antar Al Birra, the commander of the Victory Unit. "Too many people have died, so we hope the negotiations will be successful."

Al Birra's forces are battle-hardened from months of heavy fighting, and with Gadhafi's forces against the ropes, he says the battle to take the city will be short.

"If we are ordered to take the city, it won't take us long, maybe two or three hours," Al Birra said.

Many soldiers on the front hope for a peaceful solution. But as Saturday's deadline looms, many are anxious as hope begins to fade that one will be reached.

"Negotiations have completely failed," said Shamsaddin Ben Ali, a spokesman for the NTC. "We won't agree to their demands."

These demands include rebel forces entering the city unarmed, rebels refraining from searching houses and, the most contentious, a full pardon for the people of Bani Walid.

"We won't grant amnesty because there are people with blood on their hands, and we want them to face a trial," Ben Ali said. "I predict fighting to resume on Saturday."

If rebel forces are given the green light to attack, the assault from the east will be led by Cmdr. Khalil Al Shibly.

Al Shibly waits for the order from the NTC to attack Bani Walid but, like his soldiers, he hopes for a negotiated settlement.

He says three other towns between Misrata and Sirte have laid down their weapons through negotiations and welcomed revolutionary forces.

He believes Bani Walid will eventually do the same but says those who agree to a settlement in the city face retaliation by hard-core Gadhafi loyalists.

One such town -- Waddan, 400 kilometers (249 miles) south of Misrata, which also controls Sirte's last link to the outside world -- also tried to join the revolution but is now facing resistance.

"Waddan is currently being shelled by Gadhafi's forces," Al Shibly said. "The town rose up and joined the revolution but is now under attack from the nearby city of Hun."

Al Shibly has another concern for when Bani Walid is taken, either peacefully or by force. He is afraid that some Gadhafi loyalists will stage a resistance, and if those fighters are killed in an ensuing battle, their tribes will try to seek revenge, leading to a tribal war.

To avoid a potential tribal war, Al Shibly says the negotiators from the NTC have tribal links to the cities they are dealing with, but adds they still must proceed with caution.

"It is really important that we find a peaceful solution to the remaining towns," Al Shibly said. "If they don't, I'm afraid the country could see some form of tribal war."