An American soldier journeys to the 'good fight' in Libya 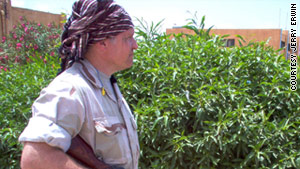 To Jerry Erwin, getting rid of Moammar Gadhafi was like ridding the world of Adolf Hitler.
STORY HIGHLIGHTS

(CNN) -- One day in April, Jerry Erwin went online at home and purchased an airline ticket. Turkish Airlines to Istanbul.

It was not exactly a planned trip. But neither was it impulsive.

He acted after watching weeks of coverage of the Libyan war. Erwin, 46, was especially struck by the images of amateur rebels fighting the professional army of strongman Moammar Gadhafi. Everyone thought the rebels would get slaughtered, that they had no chance of victory.

Erwin knew then he had to go; to play a part, however small, in helping them win. He had prepared for war all his life, after all. And never fought in one.

Libya would be his big chance to defend the American ideals in which he believed. Freedom. Democracy. Equality.

"Gadhafi was a real bad guy," he thought. "Why don't I get a passport and head over there?"

With little luggage and a lot of theoretical knowledge, Erwin left his home in the northwestern United States (he did not want everyone to know where he lives), arrived in Turkey, made his way to Egypt and eventually crossed the border into eastern Libya. He arrived in Benghazi May 13. He found what he had expected -- and worse.

He was about to embark on a life-changing experience.

They didn't know about foxholes

He grew steely strong after his mother died when he was 10 and he landed in California's foster care system. Before he earned a high school diploma, he enlisted in the U.S. Army and trained in air assault operations with the storied 101st Airborne Division.

Later, in the Army Reserve, he specialized in counterintelligence and strategic analysis.

The beefy soldier of Scotch-Irish descent said he felt the battlefield calling but he was never deployed in America's latest wars.

Besides, he had reservations about the U.S. foreign policy in Afghanistan and Iraq. But in Libya, the situation was crystal clear to Erwin. Gadhafi had to go. To him, it was like ridding the world of Adolf Hitler.

He was impressed with the rebels' resolve. Even with their backs against the wall, they displayed the determination of Rocky Balboa, he said. To Erwin, Libya's was the most dramatic struggle against a dictator so far this century.

In Benghazi, Erwin said he made his way to Dhubat al-Saff, a rebel training camp on the outskirts of the city.

There he watched doctors, engineers, students, teachers, fathers, sons learn how to fire anti-aircraft guns. They were taught how to assemble and reassemble weapons almost every day.

But Erwin noticed they were lacking training in combat survival. Forget special forces, he said. The rebel fighters had not even gone through what every teenage recruit goes through at basic training for the U.S. Army.

"They didn't even understand the need to dig a foxhole when grad missiles are coming in," Erwin said. "You need something to jump into when you are under fire. They didn't know that."

They had never seen John Wayne movies. They had nothing to mimic. But they were desperate to learn.

"I was trying to teach them very basic concepts," Erwin said.

Journalist Steven Sotloff confirmed Erwin was in Benghazi working intensively with the rebels. Sotloff said Erwin told them they were spending too much time on the firing ranges and not enough on other combat skills.

The Libyans welcomed him, Sotloff said. They loved having an American among them.

"He was like a kid out there. He had never seen combat before," Sotloff said.

Libya was his destiny

Libya, Erwin thought, was his destiny. He insists he wasn't sanctioned officially to be there -- he had paid his own way, was there on his own time.

But it was worth it. It was a teenage dream coming true. He felt as much personally fulfilled as he was to see the rebels take control of town after town.

"I wanted to do this once in my lifetime, to be on the good side of a war," Erwin said. "I felt it was a place where I belonged."

In Misrata, Sotloff said he saw Erwin on the frontlines, coaching the anti-Gadhafi fighters as they battled for a city under siege.

Erwin said the rebels were smart. They were able to improvise at key moments. They had good metal fabricators and were able to recondition weapons to carry on the fight.

Sotloff, who saw Erwin in Misrata, said the American was in awe of the rebels' ingenuity.

Erwin said he went to Libya with good intentions and never sought compensation for his stint like a mercenary would.

"His motives were altruistic, " Sotloff agreed. "He believed in what he was doing. He believes in the American narrative."

In July, Erwin returned home mainly out of concern for his wife, who worried about her husband, a lone American on the battlefields of Libya.

He watched the rebel advance again on television. In August he received an e-mail from a friend in Libya. Tripoli, said the e-mail, would fall in five days.

He had assumed Gadhafi had fortified Tripoli. The rebels were sure to hit a brick in the wall. But Erwin, like the rest of the world, watched with incredulity as the rebel army that started as a ragtag band conquered Gadhafi's compound and then the rest of the capital.

If only NATO had sent in military advisers, more people like himself, to ready train, the war might have been over in half the time, Erwin said.

Back at home, Erwin ponders the consequences of the experience.

He's a survivalist, and as such, has paid off his debts and stockpiled supplies in case U.S. civilization, as he knows it, comes to an end. He began a part-time business over a year ago as a preparedness consultant.

Erwin knows that because he was a captain in army intelligence, the military might be irked about the fact that he traveled to Libya without its knowledge.

On his way to Libya, he said the FBI questioned him at New York's JFK airport.

CNN attempted to contact both the U.S. Army and the FBI for comment. While the FBI declined comment, the military did not return calls in time for publication.

But Erwin firmly believes he did nothing wrong. He said he stuck to his moral compass.

Never in his life had he felt so proud of being American and of being welcomed as such.

He had always wanted to be involved in a good fight. He did that, he said, in Libya.