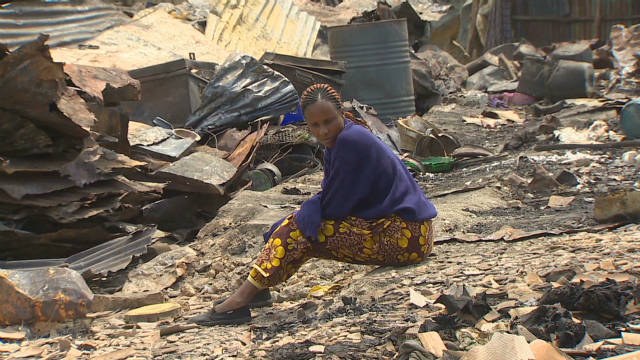 At least 75 people died in the explosion and fire, said Charles Owino, a spokesman for Kenyan police. Police and Red Cross officials expected the death toll to rise.

The fire erupted around 10 a.m., possibly as a group of people were siphoning fuel from the pipeline in the Sinai slum, officials said.

Coming to a precise accounting of the toll may be difficult because so many of the victims were found huddled together and severely burned, said Carol Nduta, a Kenya Red Cross emergency medical instructor and dispatcher who traveled to the scene. Some of the bodies were burned to dust, she said.

"Almost the whole place blew up," she said.

'So many are burnt beyond recognition'
RELATED TOPICS

Charred bodies were strewn throughout the wreckage. Some bodies were still bobbing in a stream that passes through the settlement Monday afternoon. Red Cross officials said it would be Tuesday before they could all be recovered.

Images from CNN affiliate Kenya Television Network showed flames shooting from metal-roofed buildings as firefighters and people in civilian clothing rushed to the scene and picked through the flattened remains of structures.

A total of 118 people were admitted to Nairobi hospitals for treatment, police spokesman Eric Kiraithe said.

Authorities set up counseling centers at a stadium in the city as hospital officials made an urgent appeal for blood, saying that many of those admitted to Nairobi hospitals suffered extensive burns and would require blood transfusions to survive, state broadcaster Kenya Broadcasting Co. reported.

The precise cause of the accident remained unclear.

Police suspect the pipeline was punctured, possibly in an effort to steal fuel, Kiraithe said.

KBC quoted Prime Minister Raila Odinga as saying the incident occurred after a mechanism on the pipeline failed, allowing fuel to spill into a drainage ditch, where it then ignited.

He said the explosion was the worst energy-related disaster in the country's history.

Fatalities from fuel leak accidents are common in Kenya.

Scores of residents scramble to scoop up fuel whenever there is a leak or a tanker is involved in an accident. In 2009, more than 100 people died in a fire after an oil tanker overturned in Molo, in western Kenya. In that incident, someone trying to take some of the fuel lit a cigarette, starting the fire.

A 2009 article in a Kenyan newspaper, The Daily Nation, discussed concerns of such a fire in the Sinai slum, where residents built shanties and even a church next to or even on top of the pipeline, according to the Daily Nation.

"I don't think there will ever be a fire, but you never know," the newspaper quoted one resident who it said had refused to move away from the pipeline despite eviction notices from Kenya Pipeline Company.

Deputy Prime Minister Uhuru Kenyatta pledged the government will do its best to aid victims and investigate the cause of the incident, according to KBC.