Turkey positions itself as heart of the Arab world 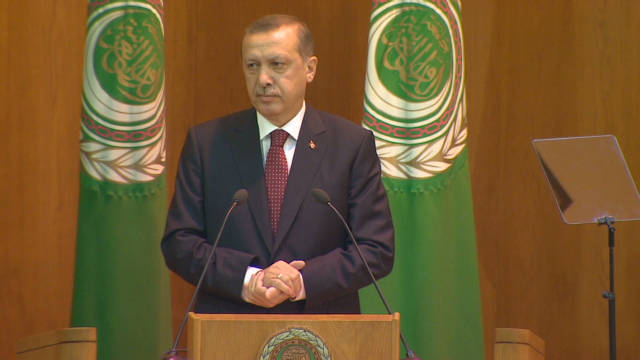 Cairo (CNN) -- -- Turkey's prime minister planted himself at the heart of the Arab world's turbulent politics on Tuesday, when he declared himself a champion of the Palestinian cause during a speech at the headquarters of the League of Arab States.

"Our Palestinian brothers should declare an independent state," Recep Tayyip Erdogan announced to an assembly of Arab foreign ministers in Cairo.

Erdogan put an end to decades of relative Turkish isolation from the Arab world. During a speech that sought to highlight shared history, values and faith, he frequently referred to Arabs as "brothers."

He also addressed the sweeping political changes that are rapidly transforming many Arab countries by repeating his endorsement of the rebel Transitional National Council in Libya, which recently captured the capital of Tripoli.

Erdogan said the rebel council "reflects the will of the [Libyan] people." It has been less than three weeks since the TNC's representative to the Arab League replaced toppled dictator Moammar Gadhafi's seat at the assembly.

In a move that is sure to win support on the streets of many Arab cities and towns, the Turkish leader continued his diplomatic offensive against Israel.

"They [Israel] should pay the price for these attacks and crimes they committed," Erdogan said, reminding the audience of the botched May 2010 Israeli commando raid against a Turkish-led humanitarian convoy sailing to break Israel's blockade of Gaza. The Turkish government expelled Israel's ambassador this month and suspended all bilateral military agreements after the Jewish state refused to apologize or pay compensation for eight Turks and an American who were shot dead by Israeli troops.

Israel argues its forces fired in self defense after passengers aboard the ship Mavi Marmara attacked its boarding party with clubs and chains. Erdogan repeated his vow to take Israel before the International Court of Justice for the deaths.

The assembled foreign ministers applauded when Erdogan said, "Israel should compensate the rights of the families of the victims. Otherwise there will never be normalization [of relations] between Israel and Turkey."

A crowd of several thousand cheering Egyptians mobbed the VIP terminal of Cairo airport late Monday night to greet Erdogan when he arrived in Egypt.Many of the mostly male supporters carried banners identifying themselves as members of the Muslim Brotherhood, a movement that has long been banned in Egypt until the recent overthrow of authoritarian president Hosni Mubarak.

"We consider him as the Islamic leader in the Middle East, and we appreciate what he did for Gaza," said a young man at the airport named Mohammed Fahed. He was clutching a poster with Erdogan's face on it, and said he was a member of the Muslim Brotherhood.

But outside the Arab League headquarters on Tuesday, a less welcoming crowd greeted the Turkish leader.

"Erdogan he did not mention Syria," said Syrian film director Maan Alhasba. "Over six months Syria is bleeding... We were expecting a serious speech about the problem in Syria. He did not mention it at all."

The Turkish government has repeatedly criticized the brutal military crackdown on protesters in Syria, but Erdogan made no mention of Turkey's neighbor to the east during his speech in the Arab League.

Egypt is the first stop on what some are calling the Turkish prime minister's "Revolution Tour." He is scheduled to travel next to Tunisia and Libya, two other North African countries that have seen their dictators overthrown during the Arab Spring.