After a day of intense fighting, anti-Gadhafi forces pull back 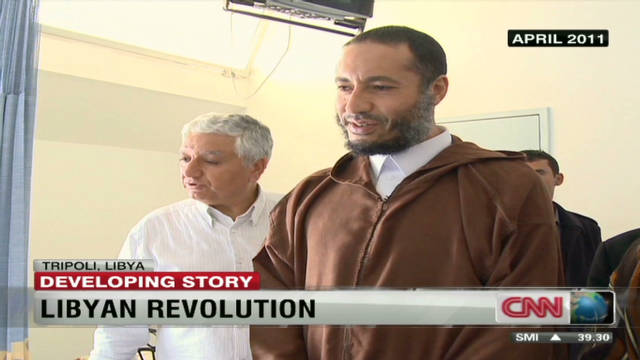 In the fallen leader's hometown of Sirte, along the Mediterranean coast, anti-Gadhafi fighters pulled back Friday night after a day of chaotic, fierce street fighting. The number of casualties was unclear.

From the central city, anti-Gadhafi fighters retreated to the outskirts after troops loyal to Gadhafi put up strong resistance. Expected support from residents of Sirte did not materialize as loyalists fought house to house with an intensity that had not been anticipated. Revolutionary forces said they would try again Saturday.

One of Gadhafi's sons, Mutassim, the regime's national security adviser, may have been coordinating the fighting in Sirte, according to Alm Hashi, a revolutionary fighter. He said Mutassim Gadhafi's voice crackled on the radio with orders for troops loyal to his father.

The Syria-based pro-Gadhafi Arab channel al-Rai aired a phone call Friday from a man it identified as Musa Ibrahim, the Gadhafi spokesman, who said forces loyal to Gadhafi were prepared for a long war.

"We have the equipment and weaponry," he said.

The fight for Sirte

Meanwhile, in neighboring Niger, the government refused to heed the demand of Libya's National Transitional Council that it hand over regime officials who had fled there, including another of Gadhafi's sons.

Saadi Gadhafi arrived Sunday in Niger, accompanied by eight regime officials "of minor importance," Niger Justice Minister Marou Amadou said this week. Saadi Gadhafi is believed to be in a safehouse in the center of the capital, Niamey.

Amadou said a transitional council delegation had yet to show up in Niger and his government was awaiting a "specific" request from the Libyans.

The Niger government believes Gadhafi's family and loyalists could face the death penalty if they are returned to Libya, Amadou said. He said Niger is honoring its international obligations in accordance with the Geneva conventions.

Amadou said his government is concerned that weapons from Libya could destabilize the region.

The whereabouts of Moammar Gadhafi, wanted by the International Criminal Court for alleged crimes against humanity, were not known, said Ben Rhodes, the administration's deputy national security adviser for strategic communications.

"I think our estimation is that there's no indication that he's left Libya," he told reporters Friday. "I think what's perfectly clear is that that regime has collapsed, that they control very, very little territory in Libya. The opposition has fully consolidated control of Tripoli, for instance, and other major population centers. So we're confident that the Gadhafi regime has come to an end, but we'll continue to work with the TNC as they seek to bring Gadhafi to justice."

In Bani Walid, anti-Gadhafi forces launched an assault and, as in Sirte, the loyalists put up stiff resistance, said Hobab Jomaa, the media center director in Zawiya.

Residents of the city, southeast of Tripoli, had been fleeing after being given 48 hours to leave.

In southern Libya, convoys of pickup trucks loaded with arms and ammunition barreled toward Sabha -- and the nearby towns of al-Birak and al-Qira, the hometown of Gadhafi's brother-in-law and intelligence chief Abdullah Al-Senussi.

Al-Senussi and another Gadhafi son, Saif al-Islam Gadhafi, also are sought by the International Criminal Court for alleged crimes against humanity.

An NTC fighter was killed and at least three were wounded Friday by a sniper in Birak, just north of Sabha, doctors said. Opposition commander Hmaida Al-Majri said NTC forces were in talks with anti-Gadhafi elders from villages around Sabha to arrange for an orderly and peaceful entry of NTC forces.

He said field commanders had not decided when to move on Sabha.

The fighters are facing dwindling ammunition supplies, particularly for the Soviet-era 14.5 anti-aircraft guns. The nearby airbase, variously known as Al-Jaloud or Al-Birak, has thousands of rounds for tanks and mortars, but not for the weaponry the anti-Gadhafi forces have.

Supplies had been shipped from Tripoli and elsewhere in the north, but had not yet arrived.

Commanders, including Al-Majri, told CNN they believe Gadhafi intelligence chief Abdallah Al-Senussi had left his hometown of Al-Gira, which was under NTC control, and moved to Sabha.

The battle for Libya raged as the United Nations Security Council unanimously approved a resolution establishing a U.N. Support Mission in Libya.

The mission's mandate is to help Libya extend state authority, protect human rights, support justice and take the steps needed to get the nation back on its feet economically.