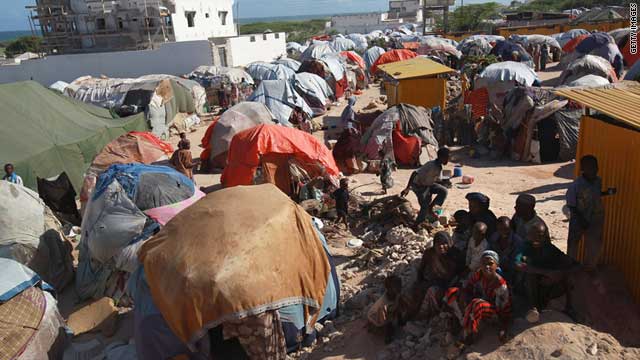 Somalis displaced by famine and drought sit in a makeshift camp on August 16, 2011 in Mogadishu, Somalia.
STORY HIGHLIGHTS
RELATED TOPICS

(CNN) -- Somalia has the world's highest mortality rate for children under age 5, according to data released by the United Nations Inter-agency Group for Child Mortality Estimation.

"Somalia's child mortality rate in 2010 stood at 180 deaths per 1,000 live births, which now ranks worst in the world," the United Nations Children's Fund said in a media statement Friday.

Somalia has been plagued by constant violent conflicts and has recently been hit by a devastating famine.

The United Nations has declared famine in six areas of southern Somalia, including Mogadishu.

In all, about 12 million people in the Horn of Africa region need assistance. Somalia is the worst hit.

"Even before this current crisis, one in six children was dying before their fifth birthday. Now we anticipate this number of deaths will be even greater," said Rozanne Chorlton, UNICEF representative in Somalia. "There is no doubt that Somalia is one of the toughest places for a child to survive."