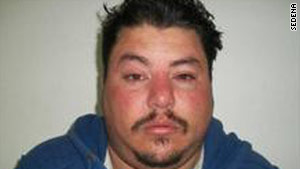 (CNN) -- A suspected leader of a Mexican drug cartel was arrested in Tijuana, Mexico, along with four other alleged cartel members, the Mexican military said.

Jesus Israel de la Cruz Lopez is believed to be a leader in the Sinaloa cartel, Mexico's largest drug mafia, which took a strong interest in the region after recent arrests of a rival cartel's leadership.

Mexican President Felipe Calderon has touted Tijuana as an example of a success story against the drug cartels in his war on organized crime. However, a Tijuana police spokesman said recently that there has been a resurgence of drug cartel activity in the coastal city.

U.S. authorities discovered about 30 tons of marijuana in November that were part of a smuggling operation using a tunnel under the California-Mexico border.

The 600-yard tunnel -- which featured a rail system, lighting and ventilation -- connected a warehouse in Tijuana to one in an industrial area of San Diego.