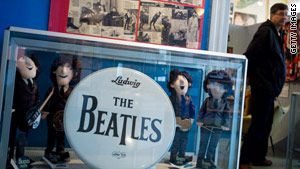 A visitor looks at the exhibits on display at the Beatles Museum in the eastern German city of Halle on April 3.
STORY HIGHLIGHTS
RELATED TOPICS

Buenos Aires, Argentina (CNN) -- Decades after The Beatles first surged onto the international music stage, fans in Argentina are flocking to a new museum dedicated to the 'Fab Four' that opened in the country's capital this week.

Museum creator Rodolfo Vazquez said he started his private collection after someone gave him the group's "Rubber Soul" record when he was 10 years old.

"I listened to 'In My Life' and I fell in love with The Beatles for all my life," he said.

"What I did was collect things, collect and collect like any fan, of football, stamps, action figures, whatever -- the little bit that I could get because in Buenos Aires there wasn't a lot of material," Vazquez said.

By 2001, Vazquez secured a Guinness World Record for the "largest collection of Beatles memorabilia." At the time, he had 5,612 items in the attic of his Buenos Aires home. The collection now contains more than 8,500 items, according to Vazquez.

Vazquez said he bought some of the material with his own money, but acquired most of it through exchanges with fans around the world.

Now, for an entrance fee of about $2.50, other aficionados can catch a glimpse of the collection, which Vazquez says is the first Beatles museum in Latin America.

"We're visiting from Uruguay. We came and we saw that it was opening and we decided to come," visitor Rodrigo Guerra said. "It's very nice. It has everything."

In addition to memorabilia on display, the complex where the museum is located also includes a thematic restaurant and a replica of the Liverpool bar where the legendary band got its start.

The museum, which opened Monday, was still drawing a steady stream of people Friday -- many of them members of a younger generation that never saw the group perform live. Several wore Beatles T-shirts. One sported a "Sgt. Peppers Lonely Hearts Club Band" tattoo.

"When the band played, I hadn't been born, so I'm looking for what my parents lived through," student Jimena Dieviataia said.