Review of Haiti vote suggests Celestin should be eliminated 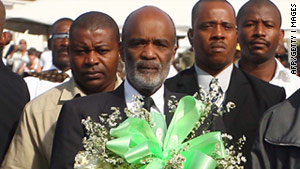 A report on the Haiti vote indicates President Rene Preval's preferred candidate should be eliminated from a runoff.
STORY HIGHLIGHTS
RELATED TOPICS

(CNN) -- A much-awaited review of Haiti's disputed presidential election made public on Tuesday suggests the government-backed candidate should be eliminated from contention.

The review, completed by an Organization of American States monitoring team, has not yet been delivered to Haitian authorities and won't likely be in the hands of President Rene Preval until after Wednesday, the first anniversary of the devastating 2010 earthquake.

But the Washington-based Center for Economic and Policy Research posted a leaked copy of the report on its website, slamming it as a sham.

"This report can't salvage an election that was illegitimate, where nearly three-quarters of the electorate didn't vote, and where the vote count of the minority that did vote was severely compromised," said Mark Weisbrot, co-director of the center.

Colin Granderson, head of the OAS mission in Haiti, said he would not comment on the election report until the Haitian government has been informed.

"I am still going by the terms of reference which prevent me from speaking publicly about the report and its context," he said. "We don't have a fixed appointment as of yet. That is what we are awaiting at this moment."

The center said it analyzed 11,181 tally sheets from the November 28 vote and found the election seriously flawed. It said the OAS report cannot help determine the outcome of the first round of Haiti's election.

The OAS review said in actuality, Martelly had won 22.2% of the vote to Celestin's 21.9%, affording Martelly a spot in a runoff election with Manigat.

The Center for Economic and Policy Research said the OAS found 12% of the tally sheets were either not received by the electoral council or were quarantined -- a much larger number of lost votes than either OAS monitors or the council had previously acknowledged.

But the center found the OAS review problematic because it tossed votes from a region that was favorable to Celestin and did not examine all of the 11,181 tally sheets.

Weisbrot said the margin of difference between Martelly and Celestin in the OAS's recount -- 0.3%-- was too small to statistically distinguish between the two.

"This appears to be a political, and not a professional, decision," he said.

Granderson said the leaking of the report complicated what has already been a difficult electoral process.

The nine-member OAS team included a statistician and an analyst, both from the United States. Despite the "magnitude of problems" and "the irregularities," the election need not be invalidated, Granderson said.

The OAS report is nonbinding but comes at a pivotal moment as Haitians mark the grim first anniversary of the earthquake and the troubled nation's political future hangs in the balance.

Some fear more unrest similar to what unfolded in the days that followed the announcement of the preliminary results. Violent protests erupted on the streets of Port-au-Prince and other Haitian cities and threw the nation, already reeling from earthquake devastation and a cholera outbreak, into further chaos.

Many who took to the streets were disgruntled with Preval and the government's perceived lack of response to crises.

Martelly said he believed he had defeated Celestin and accused the electoral council of manipulating votes.

Allegations of fraud prompted the OAS team to take on the review. A runoff, originally scheduled for January 16, has now been postponed.

Journalist and author Amy Wilentz said in a CNN commentary that she met with Preval on Tuesday and that he had already seen the OAS review. She said Preval seemed to suggest he would abide by a runoff between two candidates.

"There must be a loser," he told her. "And we must offer him proof that he lost. I have no preferred candidate."

Martelly has said he was optimistic the OAS review would reflect what he called the true results of the November 28 vote. He said he would welcome a chance to face Manigat in a two-way race.

Haiti's constitution mandates a new presidential term starting on February 7. It is unclear whether that will happen.

The European Union appealed for calm Tuesday, the eve of the earthquake anniversary.

"Today, we are extremely concerned by the political situation," said an EU statement. "The current instability prevents EU humanitarian aid to reach the people in need and makes the reconstruction process slower and more complex.

"This strongly harms our common will to place Haiti in a stronger position to embark on the longer path to stability, human development and sustained poverty reduction. We therefore want to urge the authorities of Haiti to ensure the conditions for free and transparent elections, and we call people of Haiti to remain calm and to participate to the second round of elections peacefully."