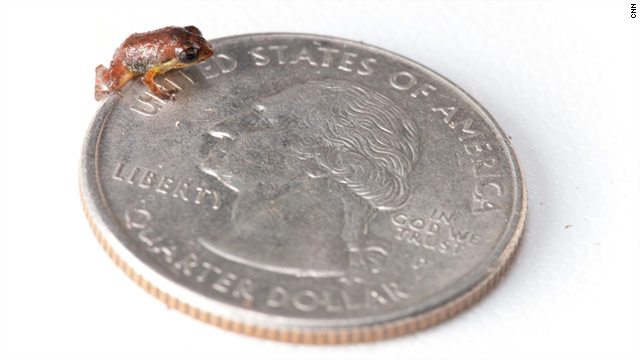 Frog species not seen for decades have been discovered in Haiti's dwindling forests.
STORY HIGHLIGHTS

(CNN) -- Even as much of Haiti struggles to recover from last year's devastating earthquake, scientists have found some survivors who are coming back from the edge.

Hopping back from the edge, to be precise.

An expedition by a conservation team searching for frogs in Haiti's dwindling forests has turned up six species not seen by scientists in more than two decades.

The species ranged from a tiny frog smaller than a coin, to a whistling frog named after Mozart to a hard-to-track frog that has the ability to 'throw' its voice like a ventriloquist to fool predators.

"It was incredible", said expedition leader Robin Moore in a press release. "We went in looking for one missing species and found a treasure trove of others. That, to me, represents a welcome dose of resilience and hope for the people and wildlife of Haiti."

Expedition sponsor Conservation International says that population pressures and environmental degradation have left the island nation with only a tiny percentage of its original pristine forests.

"A common assumption about Haiti is that there is nothing left to save", said Moore, an amphibian conservation researcher who has been to the island three times. "That is not entirely true. There are biologically rich pockets intact, despite tremendous environmental pressures. Haiti now has the opportunity to design their reconstruction plans around these pockets, and grow them, so they can more effectively act as natural buffers to climate change and natural disasters."

Moore spent just over a week in the southern Haitian cloud forests, searching through the trees, creeks, and bushes for frogs and other amphibians. In the end, they were able to find examples of just over half of the 49 known frog species in Haiti. That gives them hope that there are more out there, and that part of the overall recovery for the nation needs to include conserving its natural habitats.

"Finding six lost species in these relatively small corners of the country tells us that, despite tremendous human pressures, nature is hanging on in Haiti," said Moore.

"There is reason to hope. Managed properly, these species and ecosystems can become a source of natural wealth and national pride for the country, that we hope will offer long-term benefits for its people."