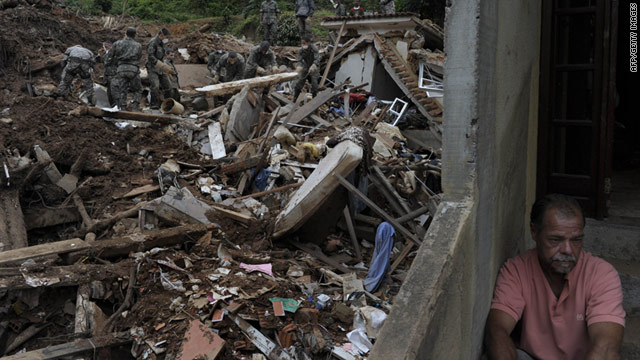 A resident sits at home as rescue workers rummage through the scene of a landslide in Nova Friburgo, Brazil, on Tuesday.
STORY HIGHLIGHTS

Rio De Janeiro (CNN) -- As floodwaters receded in some parts of the state of Rio de Janeiro, the devastation from flooding in Brazil continued to climb Wednesday, and the death toll nationwide reached at least 765.

Much of the damage occurred in that state, where heavy rains have liquefied hills into tombs of mud and debris. The state's death toll from flooding has climbed to 741, according to government figures released Wednesday. And thousands are homeless across the state.

In Teresopolis, where 302 bodies have been found, one official predicted that the final tally may far exceed that. "I think there may be five times what we found until now," said Maj. Carlos Falconi, who coordinates the rescue operation in what was once a picturesque tourist town and is now a wasteland.

In Nova Friburgo -- the hardest-hit city, according to government figures -- 355 deaths due to flooding have been counted. In Petropolis, 63 deaths; and in Sumidouro, 21.

Bodies pile up after Brazil floods

Rescuers have not been able to reach some hard-hit areas, and the damage is not over -- forecasters predict rain for the next several days in areas already submerged.

Brazilian authorities have been criticized for a lack of disaster planning and for allowing homes to be built on property known to become treacherous in the rainy season.

They are under pressure to show a strong response. Brazil is scheduled to host the World Cup in 2014 and the Olympics in 2016.