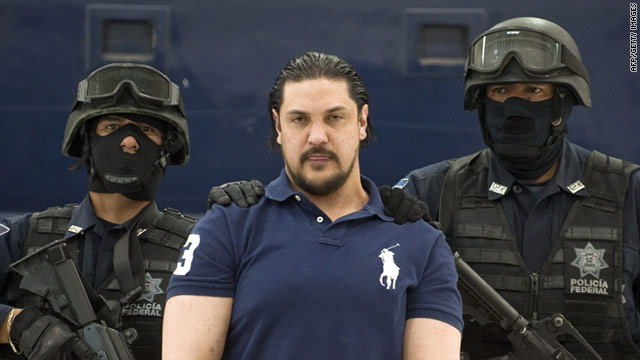 Asuncion, Paraguay (CNN) -- Relatives and a lawyer for a Paraguayan soccer player who was shot in the head in Mexico nearly a year ago reject a suspect's claim that he was not the triggerman.

Jose Jorge "J.J." Balderas Garza was arrested Tuesday in Mexico City in connection with the January 2010 shooting of soccer star Salvador Cabanas at a bar in the Mexican capital. Cabanas suffered a gunshot wound to the head, but survived.

Balderas was a suspect from the start of the investigation, but he eluded authorities for nearly a year. Once in custody, he denied that he was the one who pulled the trigger.

"Of course he is going to say barbarities and things that are not true," Cabanas' wife, Maria Lorgia Alonzo, told a Paraguayan radio station. "For us, the worst has already passed. The important thing is that Salvador is alive and recuperating."

Balderas pinned the shooting on his bodyguard, Francisco Barreto Garcia, who was arrested in June as an accomplice.

"Because of the caliber of the gun, and the testimony of (Barreto), I think J.J.'s defense will have an arduous task to prove the innocence of their client," he said.

The Mexican authorities themselves have released the content of interrogations with Barreto and a bar employee that implicate Balderas in the shooting of the soccer player.

According to the Barreto's testimony, he worked as a bodyguard for Balderas and they were both at a bar in Mexico City. Balderas went to the bathroom, and a few minutes later, Barreto followed, the state-run Notimex news agency reported.

Barreto found Balderas and Cabanas confronting each other in the bathroom, and says he saw Balderas shoot him, he told investigators, according to Notimex.

A bar employee who worked in the bathroom also witnessed the shooting and corroborated Barreto's story, the agency said.

Meanwhile, Paraguayans were pleased that an arrest was made in the case.

"Finally we're content. It was an atrocity that was committed against Salvador Cabanas and, well, we are confident in the Mexican justice system," said Carlos Ortellado.

"The truth is, I hope that whoever shot at Cabanas spends a lot of time in jail because he robbed us of an idol," said another citizen, Jazmin Garcia.