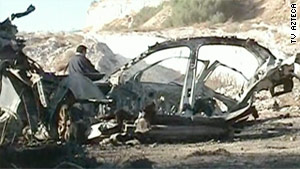 The remains of the vehicle that exploded Saturday sit along an interstate in Hidalgo, Mexico.
STORY HIGHLIGHTS
RELATED TOPICS

(CNN) -- A car bomb exploded early Saturday on an interstate in the central state of Hidalgo, Mexico, fatally wounding a police investigator and injuring three others, according to Mexico's attorney general's office.

Acting on an anonymous tip, state police investigators in the city of Tula went to inspect a suspicious vehicle abandoned on the road, the El Milenio newspaper reported. The car exploded around 8 a.m. local time as the four officers were searching the car, it said.

Mexico's attorney general's office, the PGR, has opened a preliminary investigation into the incident, according to a statement sent to CNN by spokeswoman Yazmin Morales.

In July 2010, federal police in the northern border city of Ciudad Juarez reported that a man dressed in a municipal police uniform and left for dead was used as bait by assailants to lure authorities to a car bomb that left four people dead. It was believed to be the first time in Mexican history that a car bomb was used to target federal police.

Although thought to be less sophisticated than the roadside and car bombs seen in Iraq and Afghanistan, car bombs targeting Mexican authorities -- and sometimes news stations -- have become more common in recent months.

In August, at least two car bombs exploded near the television studios of Televisa in Ciudad Victoria, the capital of Tamaulipas state in northeastern Mexico.