Castro says Obama has been underhanded in Egypt 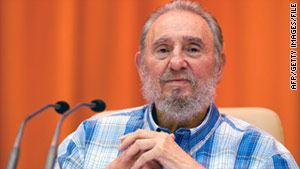 "Nobody is unaware that the United States converted Egypt into its main ally in the Arab world," Castro wrote in an essay published Monday in state media. "It was the Arab country that received more arms shipments."

"Their Machiavellianism consisted of providing the Egyptian government with arms, while USAID provided funds to the opposition," he added, a reference to the 16th century Italian political philosopher Niccolo Machiavelli. "Obama doesn't have any way to manage the can of worms that he has opened."

The current Cuban government has not commented on the crisis in Egypt although state-run media has given it limited coverage.

After his 1959 revolution, Fidel Castro was in power for almost 50 years, until illness forced him to step down in 2006. His younger brother Raul Castro took over and was officially elected two years later.

"Can the United States stop the revolutionary wave that is shaking up the Third World?" Fidel Castro wrote Monday.