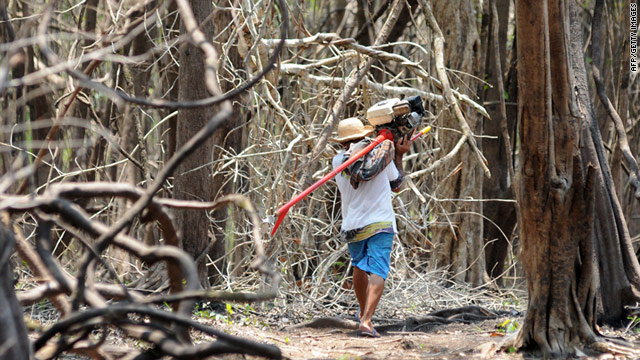 A fisherman carries a boat's engine through parched rain forest on the banks of the Negro river in northern Brazil in 2010.
STORY HIGHLIGHTS

(CNN) -- Two major droughts in Brazil's Amazon region in the last six years threaten to undermine its role as the planet's most important carbon sink and a vital brake on climate change, according to new research.

Scientists from Brazil and the UK concluded that last year's Amazonian drought was more widespread and damaging than in 2005, which at the time was thought to be a "once in a century" event.

The Amazon River fell to its lowest level in decades, with many of its tributaries such as the Rio Negro completely drying up in some area. With tens of thousands of people dependent in the waterways for their survival, a state of emergency was declared in a number of towns in the region.

The report, published in the journal Science, calculated that the carbon impact of the 2010 drought may eventually exceed the 5 billion tonnes of CO2 released following the 2005 event. This compares to the estimated 5.4 billion tonnes of CO2 emitted through fossil fuel use in the United States in 2009.

Tropical rainforests such as the Amazon act as a natural buffer to man-made emissions by absorbing huge amounts of carbon each year. However they become major emitters of CO2 during drought years.

At the present time we don't know whether these two droughts are just associated with natural climatic variability.
--Dr Simon Lewis
RELATED TOPICS

"In a normal year we would see these remote rainforests being net absorbers of carbon dioxide from the atmosphere," the report's co-author Simon Lewis, from the University of Leeds, told CNN.

"And a drought will kill some of those trees, and over time these trees will rot down and release carbon dioxide into the atmosphere.

"So over the next few years we'll see billions of tonnes of carbon dioxide going into the atmosphere from these rotting trees that were killed during the 2010 drought.

"That's enough to offset the carbon absorption, so that the rainforest becomes carbon neutral."

The research team, made up of scientists from the Universities of Leeds and Sheffield in the UK and the Instituto de Pesquisa Ambiental da Amazonia (IPAM) in Brazil, compared satellite data showing rainfall across the 5.3 million square kilometers of the Amazon Basin with information about how individual trees responded since the 2005 drought.

"We knew how many trees had died in 2005," said Lewis. "So we could use that relationship between tree deaths and the drought intensity from 2005 to estimate the impact of the 2010 drought."

Lewis warned more research was needed into the relationship between the droughts and climate change, despite some global climate models suggesting Amazon droughts will become more frequent in future as a direct result of greenhouse gas emissions.

He said: "We could see an increase in the severity and the number of these droughts, which could lead into a vicious cycle: droughts, then the forests releasing carbon reinforcing those droughts.

"At the present time we don't know whether these two droughts are just associated with natural climatic variability. If so, then we may go back to a situation of not seeing these droughts. It may just be an unusual decade."