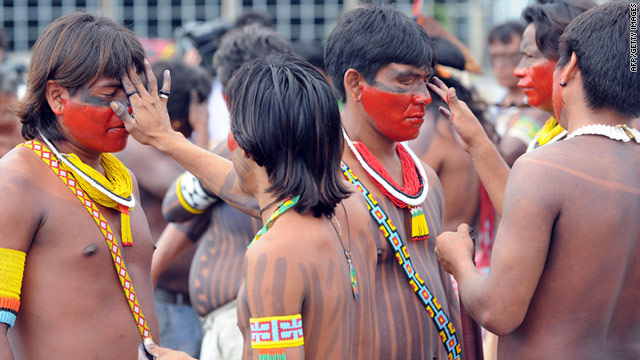 Members of the Caiapo tribe paint themselves during the protest in Brasilia, Brazil.
STORY HIGHLIGHTS
RELATED TOPICS

(CNN) -- Environmentalists and indigenous-rights supporters gathered in the Brazilian capital Tuesday to protest a hydroelectric dam project that they say would be devastating to the Amazon region.

The demonstration, in front the congressional building in Brasilia, seeks to stop the construction of the Belo Monte dam, which they say would flood at least 400,000 hectares (nearly a million acres) of forest, displacing 40,000 indigenous people and other local residents, and destroying various species of wildlife and insects.

The construction of the controversial reservoir -- a $17 billion project -- was authorized in January by Brazil's Environmental Institute.

The contractors working on the dam, to be located on the Xingu River in Para state, have permission to clear 238 hectares of the forest, an area larger than Monaco.

The protesters want to give Brazilian President Dilma Rousseff a petition signed by half a million people from around the world who criticize the project.

The government argues that the hydroelectric dam, with a potential capacity of 11,000 megawatts, is needed to guarantee a supply of energy for a country that is growing economically.

Set for completion in 2015, Belo Monte would be the second-largest dam in the country, behind Tucurui.

Journalist Fabiana Frayssinet contributed to this report for CNN.