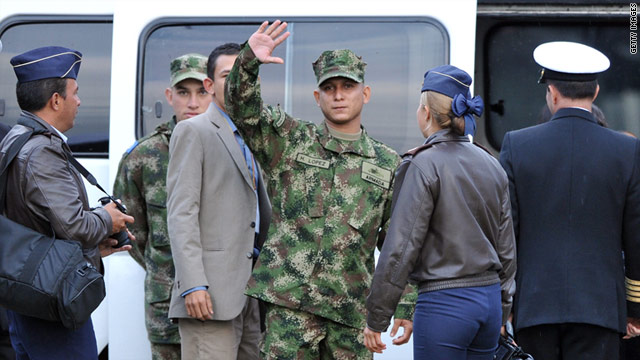 NEW: Two other hostages are not released; it is unclear why notNEW: Police officer Carlos Alberto Ocampo Perez is freedThe FARC pledged to release the group as a humanitarian gestureColombia's president says the releases are an "absurd media show"

It was not immediately clear why the other hostages were not released, or when they might be.

"One person has been released," said Red Cross spokesman Pascal Jequier. "They came back with one person instead of three."

In a statement, the Red Cross said that police officer Carlos Alberto Ocampo Perez was freed.

He was seen later on CNN affiliate Caracol TV, hopping out of a helicopter, smiling and waving to reporters.

In December, the FARC leftist guerrilla group pledged to release five hostages as a humanitarian gesture. Three of them were released last week, and two others had originally been scheduled to be released Sunday.

However, former Sen. Piedad Cordoba, who helped to coordinate the humanitarian mission, later said that the rebel group would release three hostages Sunday.

Some have suggested the hostage releases could fuel renewed negotiations between Colombia's government and the rebels.

One of the freed hostages called for dialogue between the government and insurgents.

"Humanitarian exchange is the first step toward a friendly understanding, which permits the return of our brothers deprived of their liberty," politician Armando Acuna said after his release last week.

But Colombian President Juan Manuel Santos has sharply criticized the FARC, or Revolutionary Armed Forces of Colombia, accusing the group of having a "double standard" and creating an "absurd media show" in order to draw sympathy to their cause.

On Thursday, he said he was tempted to call off the rescue mission after learning that two workers from the Carton de Colombia company had been kidnapped in southwestern Colombia on Wednesday night.

"Everything is prepared. There is very little humanitarian about this," Santos said.

"They are so crass that they are doing it this way, as if the community and the world do not notice," he said, according to Caracol.