Plane crash in Honduras kills all 14 aboard 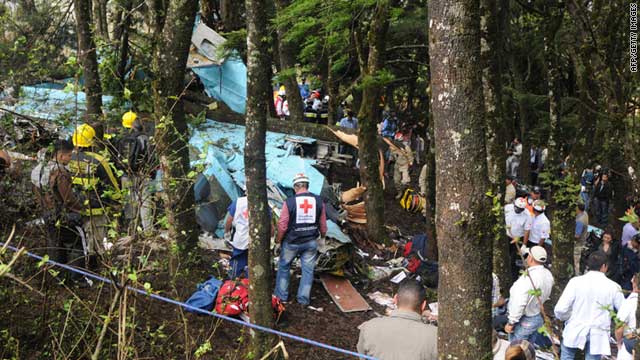 Members of the Red Cross, the Fire Department and other officials search for victims among the wreckage of the plane.
STORY HIGHLIGHTS
RELATED TOPICS
RELATED TOPICS

(CNN) -- A small passenger plane crashed Monday into a hill outside the capital of Honduras, killing all 14 people aboard, officials said.

"The impact of the plane was pretty strong, it would have been very difficult for a person to have survived, given the way the fuselage looked," said Oscar Triminio, a spokesman for the fire department.

The twin-engine Let L-410 aircraft had taken off from the northwest city of San Pedro Sula carrying 12 passengers and two pilots and was en route to Toncontin International Airport in the capital city of Tegucigalpa, the Honduran Civil Aviation Department said. The airline, operated by Central American Airways, is not affiliated with a U.S. airline with the same name.

At about 8 a.m., once it had been cleared to land, the plane began descending toward the airport but lost communication with the control tower, the department said. Rescuers were then alerted.

The crash site was just south of Tegucigalpa at the top of a hill some 2,000 feet (600 meters) above sea level, near the town of Santa Ana Francisco Morazan, Triminio said. The weather was cold and foggy, as it had been since the weekend, he said.

One of the pilots had initially survived the crash, but died on the way to the hospital, he said.

The first people to arrive at the crash site were residents of the nearby village who found one of the pilots still alive. "It's sad to hear a person in the rubble asking, 'Help! Help! Help!' " said Jorge Sandrez, mayor of Santa Ana.

Emergency personnel were searching for the data recorders to help in the investigation.

The bodies of the 11 men and three women were taken to a morgue in Tegucigalpa for identification by relatives. Civil aviation authorities identified three passengers as Americans. They gave CNN a list of those on the flight.

Also among the victims were Rodolfo Rovelo, who other news organizations have identified as assistant secretary for public works; Jose Israel Salinas, who has been identified as a trade union leader; and Carlos Chain, a former finance minister.