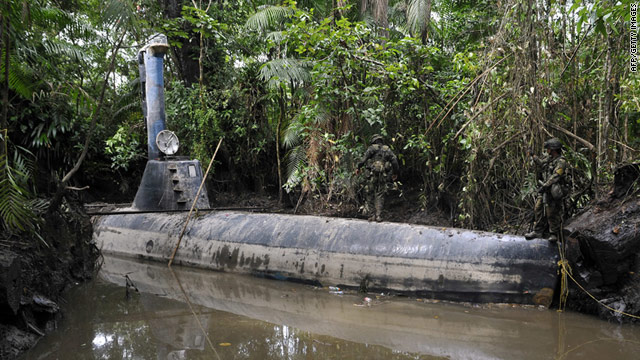 Authorities said that the homemade submarine was ready to be loaded with drugs when found in Timbiqui.
STORY HIGHLIGHTS
RELATED TOPICS

(CNN) -- The Colombian military says it has seized a submarine capable of transporting more than seven tons of cocaine from Colombia to Mexico.

This is the most sophisticated tool ever found to traffic drugs from Colombia, local media reported.

In a short news release, the Colombian military said that the submarine was ready to be loaded with drugs when found in Timbiqui, Cauca, a small town in the Pacific Coast.

According to the local authorities, the submarine is 31 meters (102 feet) long and capable of submerging to a depth of 9 meters (about 30 feet) making it very difficult to locate. This is the first time such a vessel for this purpose has been found in the country.

Mexican authorities seized a similar submarine in 2008. Then, experts said the technology used to build it was of Russian origin.