Even by Juarez standards, a deadly 72 hours 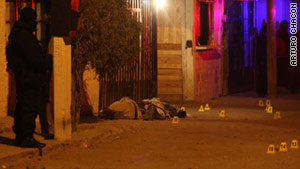 Among the dead were four police officers from three different agencies, Sandoval said.

"This is the worst violence we've seen this year," he said, referring to the three days from Thursday through Saturday.

The bloodshed started on Thursday with 14 people killed, including a municipal police officer.

Friday was the most violent day, leaving 20 people dead. A municipal police officer was killed by an assassin who belonged to a band of carjackers. Hours later, a state police investigator was executed on his drive home.

On Saturday, a highway police officer was killed by a driver who confronted the patrolman after the officer gave him a ticket. The officer was shot 10 times at close range in the middle of the afternoon. In all, 19 people were killed that day in separate shootings throughout the city.

Elsewhere Sunday, Mexico's Public Security Secretariat reported that 13 taxi drivers were killed in the resort town of Acapulco in a rash of violence that began early Friday.

Suspected drug traffickers are believed to be behind the violence, setting cars ablaze and destroying street lights and security cameras. Among the casualties, a human head was discovered on a street and another body was found near a charred vehicle.

The security office said four people were arrested in connection with the killings, and an investigation is ongoing.

Juarez is one of Mexico's deadliest cities and an epicenter of drug cartel violence. The Juarez cartel and the Sinaloa cartel are fighting a bloody turf war in the region for lucrative smuggling routes, and for drug-dealing territory in the city.

The sudden spike in violence left the city morgue overwhelmed. There were issues with where to store the bodies.

Municipal police spokesman Adrian Sanchez told CNN he has read those reports, but that the police department has no official confirmation that a new chief will be appointed.

"At this time we continue serving our current boss until we are given new orders," Sanchez said.

In the first 40 days of 2011, Juarez is averaging eight homicides per day, Sandoval said. Also, in February, at least 24 women have been killed in 20 days.