4 die in daylight shooting in Mexico 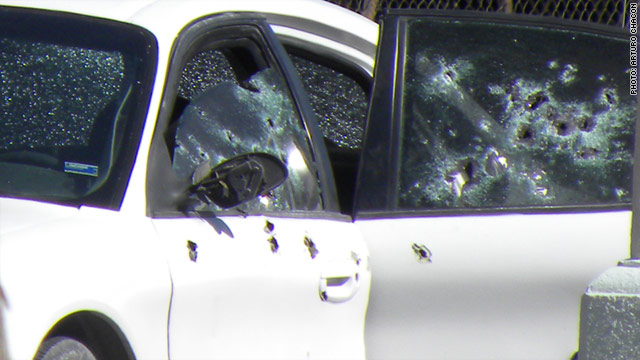 An image from the scene in Ciudad Juarez, Mexico, shows a white sedan the victims occupied when they were attacked.
STORY HIGHLIGHTS
RELATED TOPICS

Among the dead was a 10-year-old who was nearly decapitated by projectiles from the high-caliber weapon used in the attack, spokesman Adrian Sanchez said. The 5-year-old and the other injured person, 16, were taken to a local hospital where they were being treated for their injuries, police said.

Witnesses said an armed man approached their vehicle while it was stopped and opened fire, according to journalist Arturo Chacon.

There was no motive for the attack, Sanchez said.

Images from the scene showed a white sedan the victims were driving in when they were attacked. The car's side windows were broken and large bullet holes peppered the body of the car.

On Sunday, five men were shot and killed at a bar in Juarez, and three others were injured. There are no suspects in either incident. The police offered no other details when asked about the shooting.

"There are no reasons why some days the violence is high and some days the deaths are low in number. This is an ongoing war. It is impossible to try and justify why these things happen here," Sanchez said.