Mexico's Calderon to visit Washington for talks with Obama, Boehner 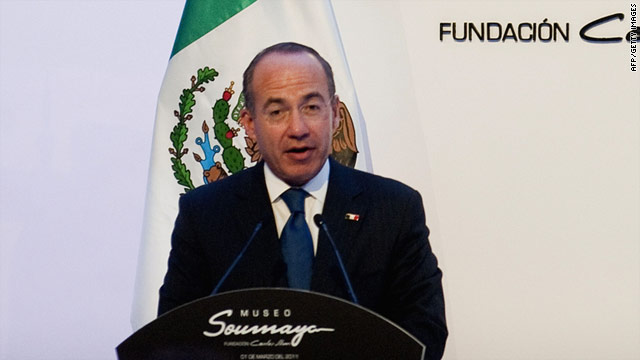 (CNN) -- Mexican President Felipe Calderon travels to Washington on Thursday to meet with President Barack Obama, U.S. House Speaker John Boehner and others during a two-day visit likely to include discussions on organized crime, immigration and commerce.

There has been tension between the United States and Mexico recently, and the meeting may serve to smooth things out.

A U.S. diplomatic cable released last fall by WikiLeaks quoted U.S. officials talking about "widespread corruption" in Mexican security agencies and "a dysfunctionally low level of collaboration." The cable, dated January 29, 2010, also described the Mexican army as "slow" and "risk averse" and concluded that only 2% of people arrested in Ciudad Juarez -- the most violent city in Mexico, wracked by drug-cartel-related killings -- were charged with a crime.

In a recent interview with the Mexican newspaper El Universal, Calderon stopped short of saying he was offended by U.S. officials, but he complained of what he implicitly interpreted as attempts by his neighbors to the north to meddle in Mexican domestic policy.

"I have no need to tell (U.S. Ambassador Carlos Pascual) how many times I meet with my security Cabinet nor what I say, right? The truth is that it's a matter that does not concern him and I don't tolerate nor accept any type of interference," Calderon told the newspaper.

Calderon said that when it comes to lack of communication, Americans should start by looking at themselves. "If there's a lack of coordination between agencies in terms of security that happens among the American agencies where we see that the DEA and the CIA and ICE ... all of them have a (disorganized) policy, right?" said Calderon.

That is the backdrop for the meeting at the White House Thursday between Calderon and Obama. It will be their fifth face-to-face talks in two years. They met for the first time in January 2009, only days before Obama was sworn in.

When both presidents met last year in May, also at the White House, immigration was at the top of the agenda as well as drug violence.

At the time, Obama said that he had directed the Department of Justice to take a "very close look" at the controversial Arizona law to crack down on illegal immigration. Calderon spoke of his fellow Mexican immigrants, saying that "many of them, despite their significant contribution to the economy and to the society of the United States, still live in the shadows and, occasionally, as in Arizona, they even face discrimination."

At least publicly, the Obama administration has talked about a close relationship with Mexico. White House press secretary Jay Carney praised the Mexican president for his efforts against drug cartels and organized crime at a news conference on February 23.

"The president is deeply committed to this strong partnership the United States has with Mexico. I think that is the reason for the (upcoming) meeting. We admire the commitment and sacrifices of the Mexican people as they confront the criminal organizations that have brought so much violence to Mexico," said Carney.

U.S. Secretary of State Hillary Clinton in January visited the Mexican historic town of Guanajuato, where she met with her Mexican counterpart, Patricia Espinosa.

With a backdrop of Spanish colonial-era buildings, Clinton said that "both President Obama and I have been very impressed by President Calderon's courage and leadership and we are very heartened by his commitment to a stronger U.S.-Mexico partnership." She announced an aid package worth a half billion dollars to help Mexico fight organized crime.

Calderon's Washington's visit happens only 16 days after American immigration and customs enforcement agent Jaime Zapata was shot and killed in a Mexican provincial highway in the state of San Luis Potosi. His partner, Victor Avila Jr., was also shot, but survived.

Eight days after the shooting, Mexican authorities arrested Julian Zapata, aka "Tweety," and five other men in connection with the crime. Last weekend, they arrested Sergio Mora Cortes, alias "El Toto," the leader of the Zetas cartel cell that operates in San Luis Potosi state.

Mexico is the United States' third-largest trading partner, after Canada and China, and the second-largest market for American exports.

Calderon will also meet in Washington with Boehner. At the top of the agenda will be issues including cooperation in security and immigration.

The Mexican president is also expected to meet with American business leaders with interests in Mexico who are concerned about drug violence.