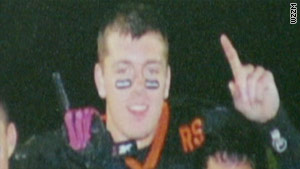 The cause of 16-year-old Wes Leonard's death is unknown.
STORY HIGHLIGHTS

Number 35 came charging up to the net and hit a last moment winning layup for his undefeated Fennville High School Blackhawks to end the season Thursday night with a perfect 20 games.

The other players hoisted their star, 16-year-old Wes Leonard, on their shoulders. The screaming crowd charged the court to hug him. It was the biggest moment in memory for the tiny Michigan town of Fennville.

And then it all turned to black.

Silence fell under the harsh glare of the florescent lights. Leonard lay still on the court, pale in his school colors. His family and coaches surrounded him. He wasn't breathing, his friend Arista Sauceda recalled. His heart had stopped cold.

After attempts to revive the varsity player in the gym, an ambulance transported him to nearby Holland Hospital. Doctors worked on him for an hour and 20 minutes.

They could not save him. By 10:40 at night, when Leonard should have been out celebrating with his classmates, he was dead.

It's hoped an autopsy will determine the cause of death, said Tim Breed, hospital spokesman and a 1977 graduate of Fennville High School.

As news of Leonard's death spread, a small community on the banks of Lake Michigan convulsed in shock. A moment of enormous school pride was reduced to irrelevance, a moment of joy turned into the opposite.

Sauceda described Leonard as an affable guy, popular for his smile and jokes. He excelled in athletics scoring 1,000 career basketball points and playing quarterback for the school's football team.

She said Leonard's family moved to Fennville when he was in middle school. His mother, Jocelyn Leonard, teaches music and is the drama director at Fennville and Sauceda said the family had helped bring the school community together.

Jocelyn Leonard canceled Thursday night's performance of "How To Succeed In Business Without Really Trying," because she wanted to watch her son play in the game, reported CNN affiliate WOOD. It was make-up game to compensate for blizzard-canceled events last month.

Everyone had so looked forward to Saturday's game -- not only was it the last of an undefeated season, but it pitted Fennville against Bridgman, a school that beat them by just one point last year. It was a revenge game, as Sauceda put it.

Sauceda had screamed her lungs out during the game. She was running towards Leonard to hug him when he went down.

Breed, the hospital spokesman, was also at the game. He doesn't normally attend games, but thought he could not miss his alma mater's perfect season closer.

When Leonard collapsed, the crowds were asked to leave the gym. Breed was on his way home when he was paged by a local newspaper reporter. He rushed to the hospital to find medical teams trying to resuscitate Leonard.

Shortly after that, a text message appeared on Sauceda's phone from a friend at the hospital. Sauceda was about to go to sleep. Instead, she was jolted awake, the shock so severe she wasn't even able to immediately cry.

In the morning, she stayed home from school. And wrote on Facebook:

"Wes, you were taken from our lives too soon ... you were the most amazing friend, I will never forget you, and how you have changed us all, I am so thankful to have been apart of your life. Please watch over us, and cheer us on as our boys win state! RIP # 35 WES LEONARD."