From Arturo Chacon, For CNN 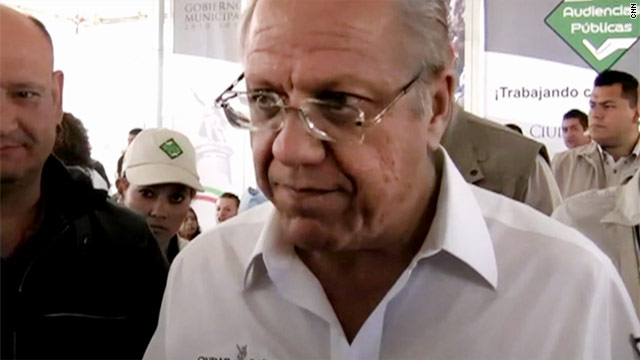 Ciudad Juarez, Mexico (CNN) -- The mayor of a violent Mexican border town said authorities are winning an escalating battle with powerful drug cartels who have killed thousands in the past year.

"This is a fight. This is a war. We are winning the war," said Mayor Hector "Teto" Murguia of Ciudad Juarez.

More than 3,000 people were killed in Juarez last year as powerful drug cartels battle for power and control of the lucrative trade.

However, Murguia said he is not worried about his safety in the city, where he lives with his family.

The mayor, who has met periodically with constituents at public events since taking office, spoke Saturday in Villa de Salvarcar -- the site of a house party massacre last year.

Fifteen people, mostly students with no ties to organized crime, were killed in the early morning hours of January 31, 2010, in an attack that officials have said was likely the result of bad intelligence on the part of cartels.

Murguia stressed the city's main problems are the lack of opportunity, education and food. He also criticized criminals' apparent impunity and the absence of any job creation.

The second-time leader was mayor of Juarez between 2004 and 2007, and took office again in October.

"I'm the first mayor to be mayor twice. It's a big responsibility," he said.

The Mexican government says there have been more than 34,600 drug-related deaths since President Felipe Calderon began a crackdown on cartels in December 2006.