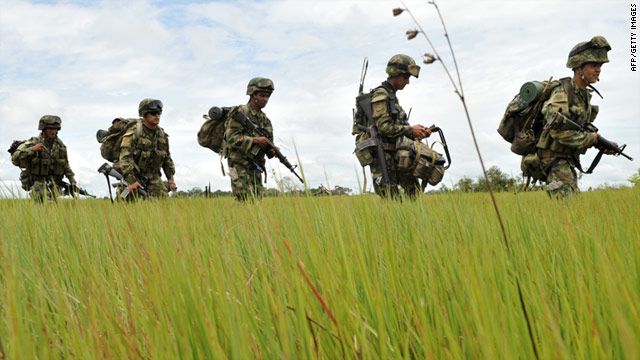 The military operation near Colombia's border with Ecuador, in the department of Putumayo, happened on Tuesday, the president said.

The rebel leader known as "Oliver Solarte" worked directly for the secretariat of the Revolutionary Armed Forces of Colombia, or FARC.

"He was a very important person inside the FARC," the president said Tuesday. "He managed all the drug trafficking and arms trafficking for the southern bloc of the FARC."

Solarte also was the FARC's contact with Mexican cartels to traffic drugs and accept financing, he said.

The FARC leader was a former militia leader for the organization and had been wanted by authorities for a long time, the president said.

The operation was a "very important strike" against the FARC, he said.

"Again, I want to tell them that if they continue as they are they are going to fall one after another, because here we don't lower our vigilance and we have many more in our sights," Santos said.

Solarte was sought for extradition to the United States for drug trafficking and was wanted in Colombia for terrorism, kidnapping, rebellion, and murder.