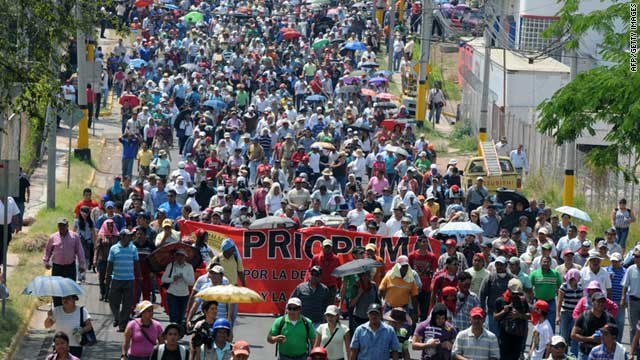 Teachers march against a bill that they say can lead to the privatization of education on March 24, 2011.
STORY HIGHLIGHTS
RELATED TOPICS

(CNN) -- Honduran teachers who have been on strike for 21 days faced a decision Monday morning: return to the classroom or endure punishments.

The government on Sunday issued an ultimatum, disseminated on radio and television, to the teachers, saying that if they did not show up for work Monday, they would be suspended for two months without pay. Those who do not show up by Wednesday, will be handed six-month suspensions, and those still striking by next week will not allowed to teach for a year, the government said.

"If these deadlines are not met, the government will begin to execute justified firings," the statement said.

The teachers are protesting an education bill that they say can lead to the privatization of the public school system. They are also demanding salaries owed from last year to some 5,000 teachers.

Those teachers who are suspended will be replaced by educators who are currently unemployed, the government said.