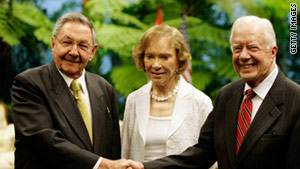 Havana, Cuba (CNN) -- On the third day of his visit to Cuba, former U.S. President Jimmy Carter is expected to meet with prominent blogger Yoani Sanchez.

Sanchez announced the meeting via Twitter on Tuesday morning: "They just called my house. I will meet with Jimmy Carter tomorrow morning. More later!"

Sanchez told CNN that a representative of the Carter Center called to invite her to a meeting at 7 a.m. on Wednesday but asked that she not reveal the location.

"It¹s a good gesture," Sanchez said. "And a sign of respect for the plurality of voices, rather than resigning himself to the government's message."

During his 2002 trip to Cuba, Carter also met with dissidents and criticized the country's lack of democracy in a speech carried live on local television.

Carter's meeting with Sanchez is likely to ruffle feathers. She has been slammed in state media for alleged links to Washington and accused of trying to rally dissidents against the government via the internet.

On Tuesday, Carter squashed speculation that he can secure the release of American contractor Alan Gross during his trip.

"We have spoken to some officials about Mr. Gross. But I am not here to take him out of the country," he told journalists, when asked about the case.

Expectations were high that Carter would try to negotiate the release of Gross, who was recently sentenced to 15 years in prison. U.S. Secretary of State Hillary Clinton talked to Carter before his departure to encourage him to raise the issue.

Cuba accuses Gross, a USAID subcontractor, of working a "subversive" project to illegally connect people to the internet with the goal of destabilizing the government.

On Monday afternoon, Carter met with Jewish leaders and the archbishop of Havana, Cardinal Jaime Ortega. He visited the Patronato Jewish center and Temple Beth Shalom.

Analysts say that even if Carter doesn't fly home with Gross, he could pave the way for Gross to be released early on "humanitarian grounds."

Gross's family has called for such a release, as his mother and his daughter are battling cancer.