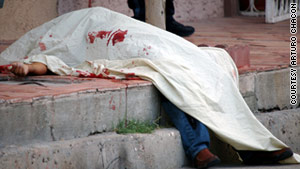 A victim of one of Juarez, Mexico's, 41 recent murders lies covered in the street.
STORY HIGHLIGHTS
RELATED TOPICS

(CNN) -- The most dangerous city in Mexico -- Ciudad Juarez -- suffered one of its bloodiest stretches this year, finishing with 41 homicides in a four-day period, among them a 10-year-old boy who was shot and killed during an attack meant for his father, the spokesman for the Chihuahua state prosecutors office told CNN.

"On Thursday the 31st of March, we had a day with many violent attacks. There was an attack at a bar where 10 people were killed and four more died in different attacks," spokesman Arturo Sandoval said.

On Friday, a group of suspects launched Molotov cocktail bombs into a second bar, causing it to go up in flames. Five people inside the business were burned or died from asphyxiation. Another three people were injured in that attack.

Late Monday, prosecutors said their investigation into the attacks on the bars has not advanced.

"We are doing research and conducting interviews with family and friends of the victims," Sandoval added.

By the end of Sunday, April 3, there were 41 homicides in a 96-hour span, approximately one person killed every 2.3 hours, according to Sandoval.

Last year, prosecutors said more than 3,000 people were killed in Juarez, most of those killings drug-related.

"In March, we had an average of five a day. Throughout the year, approximately, there have been between five to six homicides a day," he added.

"The police have practically done nothing in Juarez. On certain occasions they have made some arrests, but what happens is that the police are patrolling, but there is no real strategy of the police to stop crime and violence in Juarez," local criminologist and Juarez professor Oscar Maynez told CNN.

The real problem in Juarez is the lack of strategic collaboration between the local and federal police, and the Mexican military, Maynez said.

"At this moment the violence is undergoing a process of degeneration of moral values because the murderers are even killing children. These people are drugged and insensible people who have no obstacles in performing their jobs," he added.