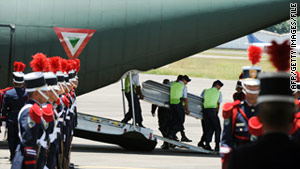 Soldiers in Honduras last year unload the body of one of 72 immigrants who died in San Fernando, Mexico, in August.
STORY HIGHLIGHTS

Mexico City (CNN) -- Thirteen more bodies of men have been uncovered from a series of mass graves in northeastern Mexico, bringing the total to 72, officials in Tamaulipas state said Friday.

Eight mass graves were found near the town of San Fernando on Wednesday, and two more had been found by Friday, according to the Tamaulipas secretary of state. All the bodies appear to be those of Mexican nationals.

Authorities found the graves during an investigation into a report of the kidnapping of passengers from a bus in late March. The investigation led them to San Fernando, the same place where in August of last year, the bodies of 72 immigrants were found at a ranch.

Forensic investigators will examine the bodies in an attempt to identify them and to see if they are the missing bus passengers.

Tamaulipas Gov. Egidio Torre Cantu has condemned the violence, saying he would work with federal authorities to find and punish those responsible.

"These reprehensible acts underline the cowardice and the total lack of scruples of the criminal organizations, which generate violence in our country, and especially in the state of Tamaulipas," the office of Mexican President Felipe Calderon said in a statement.

Amnesty International also called on Mexico to fully investigate, and it criticized the country's efforts to protect its citizens and migrants passing through.

"The mass graves found yesterday once again show the Mexican government's failure to deal with the country's public security crisis and reduce criminal violence, which has left many populations vulnerable to attacks, abductions and killings," said Rupert Knox, a researcher on Mexico at Amnesty International. "All too often, such human rights crimes have gone unpunished, leaving criminal gangs and officials acting in collusion with them free to target vulnerable communities, such as irregular migrants."