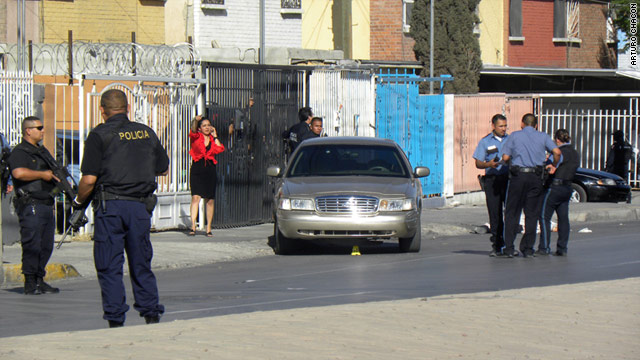 As many as 600 people have been killed in Ciudad Juarez in 2011, according unofficial estimates.
STORY HIGHLIGHTS

(CNN) -- The most dangerous city in Mexico wrapped up another bloody weekend with 39 killings between Friday and Monday, including the murders of three police officers, the Chihuahua state prosecutor's office in Ciudad Juarez said Tuesday.

In one of the most high-profile homicides, Ismael Sergio Apodaca, coordinator of the Police Station "Chihuahua," was executed on Friday. Hours earlier, a municipal official was attacked and taken to the hospital in serious condition, the state prosecutor's office told CNN. In all, eight people were killed that day.

On Saturday, another 16 people were killed, including six victims shot dead at a workshop and another four killed in front of a garage. The victims, all male, were between 20 and 30 years old.

Nine people were executed on Sunday. Juarez municipal police officers were operating on high alert after finding "narcopintas" -- graffiti messages left by suspected drug traffickers -- on public walls near a local park. By day's end, another two police officers had been killed by suspects thought to be involved with organized crime, the prosecutor's office said.

Perhaps the most gruesome homicide in the four-day period was that of a man whose torso was found Monday. The body had no head or limbs, officials said. He was one of six killed that day, and has not been identified.

According to unofficial estimates, as many as 600 people have been killed in Ciudad Juarez since the beginning of the year. More than 3,000 people were killed in drug-related violence in 2010.

In a visit to the Texas Senate in Austin in the wake of the bloody weekend, Juarez Mayor Hector "Teto" Murguia Lardizabal told reporters that improved communication between U.S. and Mexican officials is a key to combating the drug violence.

While Murguia attempted to downplay speculation that the violence in his city is getting worse, the mayor's newly appointed top cop in Juarez -- Julian Leyzaola -- has yet to give an interview since arriving in office a little more than a month ago. He's received several public death threats since he took office March 10.

Leyzaola is also facing allegations of abuse from Human Rights Watch. The group asked him to respond to allegations that police under his command in the so-called Delta Group were involved in the disappearance of four young men in Juarez in late March.

Three agents from the Delta Group have already appeared before a judge for the crime of forced disappearance.

Leyzaola was named in similar human rights abuse scandals during his stint as the top cop in Tijuana, Baja California. In past statements he has repeatedly denied the claims, dismissing the accusations as smear tactics by his critics.