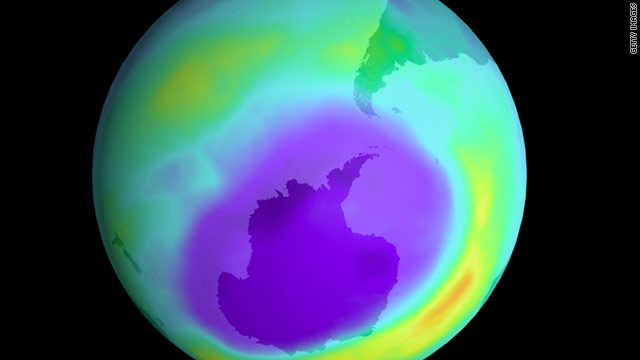 NASA satellites recorded an 11.5 million square-mile hole in the ozone over Antarctica in 2000
STORY HIGHLIGHTS

London (CNN) -- The hole in the ozone layer over Antarctica is affecting weather patterns across the entire Southern Hemisphere, according to a new scientific study.

The findings published by researchers from Columbia University's School of Engineering and Applied Science is, they say, the first to demonstrate how ozone depletion in the polar region influences tropical circulation and increases rainfall at lower latitudes.

"It's really amazing that the ozone hole, located so high up in the atmosphere over Antarctica, can have an impact all the way to the tropics and affect rainfall there -- it's just like a domino effect," said lead author of the paper, Sarah Kang.

Using state-of-the-art climate models -- created by the Canadian Center for Climate Modeling and Analysis at the University of Victoria, British Columbia -- Kang and co-author Lorenzo Polvani (a research scientist at the LamontDoherty Earth Observatory) calculated atmospheric changes produced by creating an ozone hole and then compared these with observed changes over the last few decades.

The close correlation between the climate model and the observed changes led Kang and Polvani to conclude that the hole in the Antarctic ozone -- first discovered by scientists in the mid-1980s -- to be the likely cause of the atmospheric changes in the Southern Hemisphere.

We show in this study that it has large and far-reaching impacts. The ozone hole is a big player in the climate system!
--Lorenzo Polvani, co-author of study
RELATED TOPICS

Located in the Earth's stratosphere, the ozone absorbs much of the Sun's harmful ultraviolet rays. But widespread use of manmade compounds containing chlorofluorocarbons (CFCs) during the second half of the 20th century damaged the protective layer, scientists say.

But since the Montreal Protocol -- an international treaty to protect the ozone layer -- entered into force in 1989 global CFC production has been phased out resulting in the halting of ozone depletion.

Many scientists expect the ozone layer to repair itself completely by the middle of this century.

"While the ozone hole has been considered as a solved problem, we're now finding it has caused a great deal of the climate change that's been observed," Polvani said in a statement.

The study has important implications for the Intergovernmental Panel on Climate Change (IPCC) who didn't even mention the ozone hole in their last summary for policymakers, Polvani says.

"We show in this study that it has large and far-reaching impacts. The ozone hole is a big player in the climate system!"

Ozone researcher Markus Rex, who was involved in the recent report detailing record depletion of the Arctic ozone layer, welcomed the new study.

"Previous studies have noted that the ozone hole for example has led to higher wind speeds in southern latitudes increasing storm intensity," Rex, an atmospheric physicist from the Alfred Wegener Institute in Germany, said.

"This new aspect linking the dynamical changes that far north at the subtropics and rainfall patterns is really interesting and important I think."