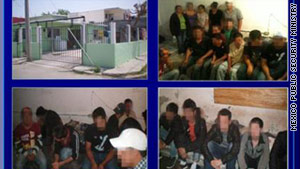 The hostages were found Monday inside a house in the city of Reynosa, across the border from McAllen, Texas.

The operation followed the rescue of 68 hostages the previous week, also in Reynosa. The city is about 90 miles north of the town of San Fernando, where authorities recently uncovered 177 bodies from mass graves. Many of the bodies are believed to be those of bus passengers who were kidnapped. San Fernando is also where the bodies of 72 migrants were found last year.

Two people were arrested in connection with the earlier rescue, but no one was taken into custody for Monday's discovery.

The state of Tamaulipas, where Reynosa and San Fernando are located, is the site of a bloody battle between rival drug cartels. The Gulf cartel and Zetas cartel used to work together, but split more than a year ago and are now fighting for control of lucrative smuggling routes into the United States.