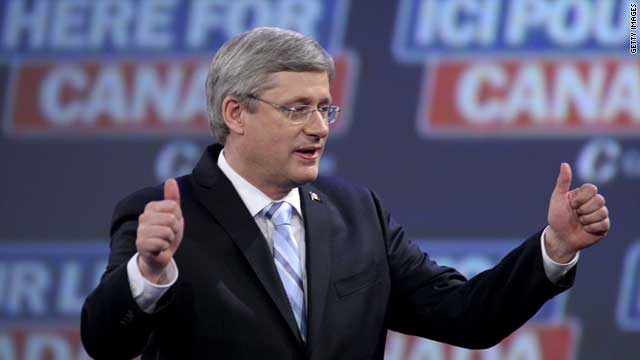 From his campaign headquarters in Calgary, Prime Minister Stephen Harper said Monday Canadians had made a clear choice.
STORY HIGHLIGHTS

(CNN) -- Canada's Conservative Party was riding to a definitive victory as results from national elections came in early Tuesday.

Preliminary results also showed that Conservative Prime Minister Stephen Harper would remain in power for the third time and also showed that a left-leaning political party, the New Democratic Party, would be propelled to the historic position as the country's official opposition.

But equally as momentous, Canada's separatist party from Quebec, the Bloc Quebecois, was nearly wiped off the political map in Monday's election, returning just a handful of members of parliament to the Canadian House of Commons.

According to preliminary results from Elections Canada, Harper is set to win his first majority government with 166 seats out of a possible 308. His party's share of the popular vote in Canada stood at about 40%, as most of the votes were counted from across the country.

The election started with a whimper and a near collective moan from Canadians, as many called this an unnecessary election. But about three weeks into the five week campaign, the so-called 'Orange Crush' hit Quebec, orange being the party colors of the New Democratic Party.

From his campaign headquarters in Calgary, Harper hailed the Conservative victory, saying Canadians had made a clear choice.

"They chose hope, hope and unity of purpose and a strong Canada," said Harper before adding that he would be a leader for all Canadians.

While polls had predicted the New Democratic Party's popularity, the results stunned even party insiders. Party leader Jack Layton said that Canadians had said no to "politics of usual."

The surge of support for the NDP in Quebec turned out to be a game-changer not just in that province but across the country.

Michael Ignatieff, the former Harvard scholar who returned to Canada in 2005 to get into politics, led his Liberal party to arguably one of its worst defeats. For the first time, the party of former Canadian Prime Minister Pierre Trudeau finished third.

"It is tough to lose like this," Ignatieff bluntly told supporters in Toronto.

"Democracy teaches hard lessons and we have to learn them all," he said. "Leaders have to accept their historic responsibility for their historic defeat."

This election will change the political dialogue in Canada with the Conservatives potentially in full control of law-making in the House of Commons. Some of Harper's priorities for defense, the economy and justice issues now stand a much better chance of becoming law.

The head of Canada's Green party also made history on Monday night. Elizabeth May became the first Green party member to be elected to parliament.

The election was called after Canada's House of Commons passed a no-confidence resolution aimed at Harper's government, triggering the dissolution of Parliament.

Liberal party leader Michael Ignatieff sponsored the resolution, citing a recent House committee report that found the government in contempt for failing to provide lawmakers with requested information on its spending plans.