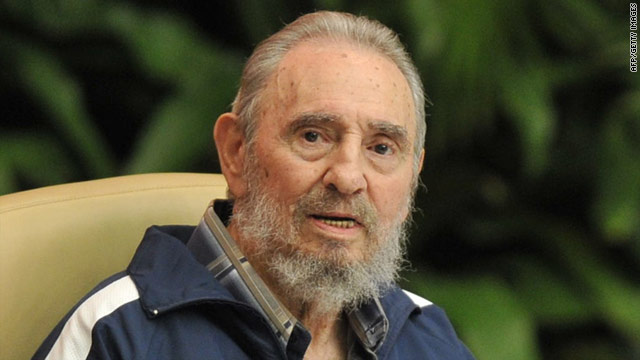 "The assassination of an unarmed human being surrounded by his family constitutes an abhorrent act," writes Fidel Castro.
STORY HIGHLIGHTS
RELATED TOPICS

Havana, Cuba (CNN) -- Former Cuban President Fidel Castro slammed the method used to kill Osama bin Laden on Thursday, saying there is no excuse for "assassinating" an unarmed man in front of his family.

"Whatever the actions attributed to bin Laden, the assassination of an unarmed human being surrounded by his family constitutes an abhorrent act," Castro wrote in an essay published in state media.

However, in the article Castro calls the killing of bin Laden an "execution" by U.S. Navy SEALs and says the attack and the subsequent burial at sea "show fear and insecurity, and turn him into a much more dangerous person."

White House Press Secretary Jay Carney has told reporters bin Laden and his family lived on the second and third floors of his compound, and they were cleared last, with bin Laden killed toward the end of the siege.

Bin Laden was not armed but did put up resistance when U.S. forces entered the compound, he said.

One of bin Laden's daughters has told Pakistani interrogators that she saw her father shot, a senior Pakistani intelligence source said Wednesday. The daughter, believed to be 12 or 13 years old, was among those left behind at the compound after Monday's U.S. raid, the source said.

In the article, Castro also said Pakistan's laws had been violated and its "national dignity offended."

Castro concludes in his essay that American public opinion will turn in time.

"After the initial euphoria, public opinion in the United States will end up criticizing the methods, which," he wrote, "far from protecting its citizens, will end up multiplying the feelings of hate and venegence toward them."