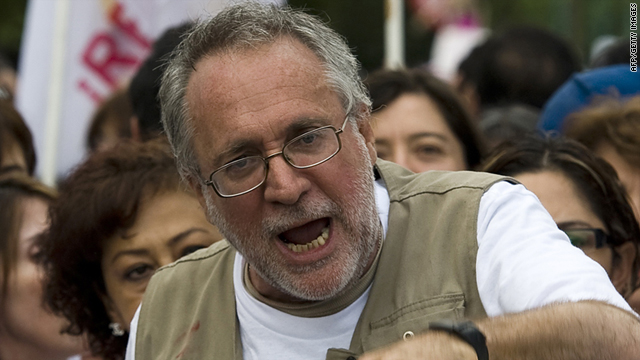 Mexican poet Javier Sicilia leads thousands in a demostration against violence along the streets of Cuernavaca last month.
STORY HIGHLIGHTS

(CNN) -- Javier Sicilia says he wrote his last poem after his son's brutal slaying. But words are still pouring out of the well-known Mexican poet's mouth.

This time, he says, they have a different purpose: mobilizing Mexicans to speak out and demand action from the country's government.

Since the March killing of his son, Sicilia has become one of the most outspoken voices against Mexico's surge of drug-related violence. His latest effort -- a three-day "silent march" from the city of Cuernavaca to the nation's capital -- begins Thursday morning.

"We are going there to look for a peaceful Mexico with justice," Sicilia said in an online video post promoting the march.

For Sicilia, the search began on March 28.

That day, his 24-year-old son's lifeless body was found with six others, crammed inside a car outside the central Mexican city of Cuernavaca. Masking tape was wrapped around their skulls, faces, wrists and ankles.

Authorities believe all seven victims suffocated to death, and they have said members of Mexico's Pacifico Sur cartel are suspects.

This story is full of faces of pain. ... This is a country that cannot tolerate anymore
--Javier Sicilia, Mexican poet
RELATED TOPICS

Before that day, Sicilia was known for the poems and literary essays he wrote for Mexican publications. He was an intellectual figure, not an activist.

Less than a week later, Mexican media reported that Sicilia had written his last poem. He read it beside a memorial for his son in Cuernavaca's central square.

"The world is no longer dignified enough for words," he said, according to the state-run Notimex news agency.

"This is my last poem, I cannot write more poetry," he concluded. "Poetry no longer exists inside me."

In an open letter "to politicians and criminals" published in the April 3 edition of the magazine Proceso, Sicilia quoted French existentialist Albert Camus and German writer Bertolt Brecht, as he urged Mexicans to take to the streets.

"We do not want one more man, one of our sons, killed," he wrote, calling for "a national movement that we must keep alive to destroy the fear and isolation put in our minds and souls by your incompetence, politicians and your cruelty, criminals."

On April 6, he led a march of thousands through Cuernavaca's streets. Demonstrators carried signs that read, "We've had enough." They demanded an end to the violence that has killed more than 34,600 people since Mexican President Felipe Calderon began a crackdown on cartels in December 2006.

That day, protesters marched in more than 30 cities across Mexico.

At one demonstration, a woman read the names of victims in front of a crowd of hundreds that yelled out "not one more death" after each name was called.

"For the government, everything is a question of statistics, of collateral damage, of abstractions," Sicilia said in an interview with CNN that night.

"Now we are going out into the street to say this: Every city has its story. Every town has a story. This story is full of faces of pain. ... This is a country that cannot tolerate anymore," he said.

The case of Sicilia's son has captivated the Mexican public and caught the attention of the president, who has met with the poet and spoken publicly about the government's commitment to finding his son's killers.

In an interview with the Mexican newspaper Excelsior last month, Calderon said the government was committed to finding those responsible for the crime.

"We already have clearly identified those responsible. ... We are on their trail and I hope we can capture them," he said.

Two suspects have been arrested.

Sicilia says his crusade to demand justice is not just about his son.

"There are many dead, and there is much pain. ... These citizens have the same dignity as my son," he told CNN.

Sicilia has called for the resignations of the Morelos state governor and local officials in and around Cuernavaca. He drilled plaques with victims' names into a pillar of the Morelos government building, accusing authorities of failing to bring criminals to justice.

Cuernavaca has long been known for its temperate weather and numerous Spanish-language schools. The city is far from the border regions that have seen much of Mexico's drug violence, but it has not been unscathed.

It was the site of one of the most dramatic chapters in Mexico's drug war, when military commandos raided an apartment there in December 2009 and killed drug lord Arturo Beltran Leyva, head of the Beltran Leyva cartel and one of Mexico's most wanted criminals.

On Thursday Sicilia and others hope to start a new chapter there.

Their goal, he says, is to call for an end to violence and demand that Mexican authorities sign an agreement to re-establish peace and justice in the country.

As they march, they plan to place plaques with victims' names in cities along the way.

"These people aren't mysterious statistics. They are human beings. And behind them, there are families who are suffering very much," Sicilia said in a video posted on the march's website.