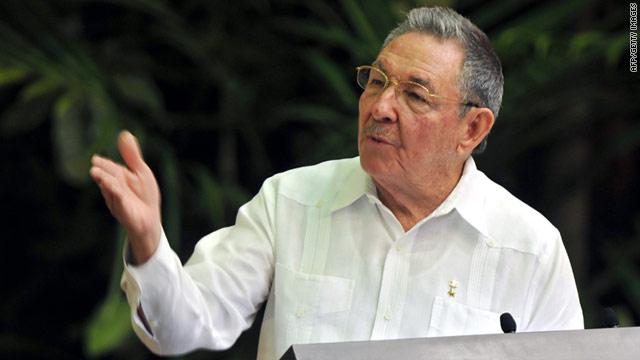 Cuban President Raul Castro pledged in 2008 to do away with unnecessary restrictions on Cuban citizens.
STORY HIGHLIGHTS
RELATED TOPICS

Havana, Cuba (CNN) -- The Cuban government said Monday that it plans to study ways to allow residents of the island nation to travel abroad as tourists, suggesting it will ease the bureaucratic hurdles and outright restrictions that prevent many residents from leaving.

The plan was included in 313 guidelines approved by the 6th Communist Party Congress last month. The list became public when it was published for the first time Monday.

The congress agreed to "study a policy that will allow Cubans resident in the country to travel abroad as tourists," according to the document.

The guidelines do not include further details about the possible policy change.

Currently, Cubans are not officially prohibited from traveling abroad for tourism, but a series of requirements prevents them from simply buying a plane ticket and leaving.

Cubans must obtain an exit visa from the government, known as a "white letter," which costs $150.

In order to acquire the visa, a resident of the country they want to visit must write a letter of invitation and register it with the Cuban Embassy, paying up to $200.

Once the paperwork is in order, the Cuban government still has the right to deny an exit visa, as it has done with many dissidents. Medical professionals are only allowed to leave Cuba to work for the government abroad.

There has been speculation since 2008 that Cuba would eliminate the exit visa and the letter of invitation as part of President Raul Castro's pledge to do away with unnecessary restrictions. That year, Castro lifted prohibitions on Cubans staying in hotels and buying mobile phones.

The bureaucratic hurdles to traveling abroad are some of the most criticized in the country.