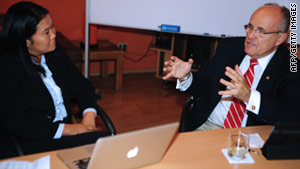 (CNN) -- With a contentious runoff election less than three weeks away, a Peruvian presidential candidate is hitting the campaign trail with former New York City Mayor Rudolph Giuliani at her side.

Wearing an American-flag lapel pin, Giuliani stood behind candidate Keiko Fujimori as she spoke to reporters this week about her proposed security program for Peru.

"We have invited Mr. Giuliani so that he strengthens this program, so that he gives us ideas about how we can better fight crime," Fujimori said.

Giuliani's proposals for Peru include building more jails and creating a system to better track crime statistics, she said.

Fujimori praised Giuliani's tough stance on crime and his track record turning around New York City, signaling that Giuliani would be her security adviser if she wins the June 5 presidential election, Peruvian state media reported.

On Tuesday Fujimori's running mate denied Giuliani's presence was part of the campaign's electoral strategy, saying that the former New York mayor came to Peru this week because of "scheduling reasons."

"It has not exactly been a strategy that he come now, but at any rate it has been lucky, because, yes, I think it has been at a good time," vice presidential candidate Rafael Rey said in a statement posted on the campaign's website.

Fujimori is a former congresswoman and the daughter of former President Alberto Fujimori, who is serving a 25-year sentence for human-rights abuses.

In a 2008 interview, she said she wouldn't hesitate to grant her father amnesty because she believes he is innocent.

She has since backed away from those remarks.

In the June 5 runoff election, she faces nationalist Ollanta Humala, who garnered more votes in the first round of elections last month.

Humala, who lost in the second round of the 2006 elections, has said that he has matured and become more moderate since then.