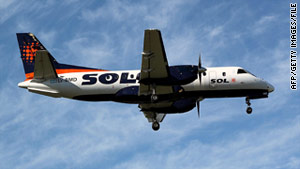 This Sol Airlines Saab 340 plane is similar to the one that crashed Wednesday night in southern Argentina.
STORY HIGHLIGHTS
RELATED TOPICS

(CNN) -- All 22 people aboard a commuter plane were killed when it crashed in southern Argentina, the airline said Thursday.

The Sol Lineas Aereas plane was headed to the city of Comodoro Rivadavia from Neuquen on Wednesday night when the pilot issued a distress call, said airline spokesman David Avellanda.

Shortly after, the plane went off the radar, he said. It had on board 18 adult passengers, a child and three crew members.

Authorities later found the wreckage of the plane in Rio Negro province. There were no signs of survivors, the airline's website said.

"Last night, when the emergency happened, we put in place a search and rescue operation in the area, which at the time was experiencing very bad weather conditions," said a spokesman for the country's National Civil Aviation Administration, according to the state-run Telam news agency.

Once the wreckage was found, federal investigators were called to the scene to determine the cause of the crash, he said.

On Thursday, the company suspended some flights from the Falklands and rerouted those planes to mainland Argentina, where they would be used to transport the family members of the victims, the company said.