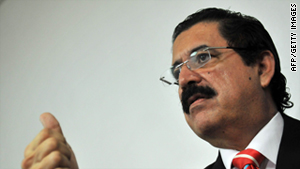 (CNN) -- Ousted ex-Honduran President Manuel Zelaya inked an accord Sunday with the country's current president that will allow him to return to Honduras after almost two years in exile, officials said.

The deal, which was brokered by the Colombian and Venezuelan governments, was signed in Cartagena, Colombia, by Zelaya and Honduran President Porfirio Lobo.

It allows Zelaya and his allies to return to Honduras and helps clear the way for the country to rejoin the Organization of American States. Zelaya and his supporters will also be permitted to participate in Honduran politics.

Zelaya was overthrown in a military-led coup June 28, 2009, and flown into exile. He sneaked back into Honduras in September of that year and got refuge in the Brazilian Embassy, where he remained until Lobo arranged for Zelaya to get safe passage out of the country.

"This agreement is great news to Latin Americans because it normalizes the situation in the Inter-American system," Colombian President Juan Manuel Santos said in a statement soon after the deal was signed. He said he expects the OAS to act soon to welcome Honduras back into the fold.

Honduras has been excluded from the regional body since the coup, in part because Zelaya had not been allowed to return home without fear of prosecution. He faced corruption charges, which were dropped this month.

Many countries, including the United States, have recognized the Lobo government, while others, such as Brazil, have not.

"Now that the obstacles to former President Zelaya's return to Honduras have been removed, I am confident that we will soon welcome Honduras back as a full member of the inter-American system," U.S. Secretary of State Hillary Clinton said in a speech this month. "That is a step that is long overdue."