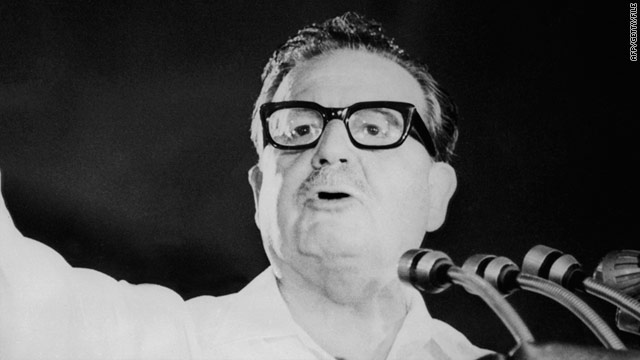 (CNN) -- Forensic experts exhumed the remains of former Chilean President Salvador Allende on Monday as part of an investigation into whether he killed himself or was assassinated during a 1973 military coup, the medical branch of the country's Justice Ministry said.

Official accounts ruled the leftist leader's death a suicide, saying that he shot himself -- with a gun that was reportedly a gift from Fidel Castro -- as Gen. Augusto Pinochet's troops closed in on the presidential palace.

But some of Allende's supporters have long doubted that account. A judge ordered the exhumation in April as part of a massive investigation of 726 reported human rights violations during Pinochet's rule, CNN Chile reported.

"The people want to know. This is something that the country needs," said Minister Mario Carroza, the judge in charge of the investigation into Allende's death.

Politicians stood solemnly beside the Allende family's crypt at a Santiago cemetery Monday as investigators wearing white gloves carried his remains in a flag-draped casket, images from CNN Chile showed.

At a nearby laboratory, an international team of experts in archaeology, anthropology, forensics, pathology and ballistics had already begun taking X-ray images of the remains Monday morning, Chile's Legal Medical Service said in a statement.

In the coming days, scientists will send bone specimens from the coffin and blood samples from Allende's two daughters and a granddaughter to a laboratory in Innsbruk, Austria, for DNA testing, the statement said.

The agency's head said he was hesitant to establish a time frame for the investigation, noting that many steps remained in the analysis.

"It is necessary to open the casket, look at the preservation of the bone fragments, analyze if there is other related evidence, of clothing, et cetera. ... to obtain the information the judge has requested," said Dr. Patricio Bustos, national director of the agency, which is part of Chile's Justice Ministry.

Whatever the investigation's results, they will likely resonate across the South American country, said Peter Hakim, president emeritus of the Inter-American Dialogue, a nonpartisan policy institute in Washington.

"Allende is still a hero for many on the left in Chile. He was a historic figure because he was the first socialist leader ever elected in the hemisphere. ... This is a man who still commands a considerable degree of respect," Hakim said.

"The family has no doubt, we never have," she said.

A statement posted on her website Monday said the family was "reaffirming what we have said all these years, our conviction is that President Allende made the decision to die ... in defense of the mandate that was given to him by the people."

"A process has started that could end in finally establishing that it was a suicide or that it involved a homicide," he said. "The important thing is to know the truth."