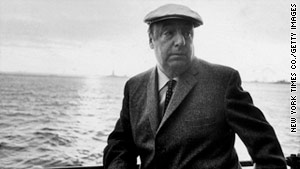 (CNN) -- Chilean authorities will launch an investigation into the 1973 death of writer Pablo Neruda, a judge ruled Thursday.

The Nobel Prize-winning poet's death certificate says he died of prostate cancer, CNN Chile reported. But officials with the country's Communist Party asked officials this week to probe his death.

"We are not accusing anybody, a priori. What we want is that the courts to fully clarify the situation," Communist Party President Guillermo Teillier told reporters Tuesday.

"Without a doubt, Neruda in exile would have been something very difficult for the dictatorship," he told reporters.

A biography of the poet on the website of the Neruda Foundation, which Neruda's widow founded to promote and preserve his legacy, notes the coup as a significant date in his life.

"The majority of Neruda's friends were made prisoners or had to hide or seek political asylum in other countries," it says.

Neruda, a member of Chile's Communist Party, was also a lawmaker in the South American country and served as its ambassador to France.

But internationally, he is most well-known for his poetry.

Neruda received the Nobel Prize in Literature 1971 "for a poetry that with the action of an elemental force brings alive a continent's destiny and dreams."

The investigation into his death comes as Chilean authorities probe the death of another high-profile figure in the nation's history: former Chilean President Salvador Allende.

Last week forensic experts exhumed Allende's remains as part of an investigation into whether he killed himself or was assassinated during the 1973 coup.

Official accounts ruled the leftist leader's death a suicide, saying that he shot himself -- with a gun that was reportedly a gift from Fidel Castro -- as Gen. Augusto Pinochet's troops closed in on the presidential palace.

But some of Allende's supporters have long doubted that account. Carroza ordered the exhumation in April as part of a massive investigation of 726 reported human rights violations during Pinochet's rule, CNN Chile reported.