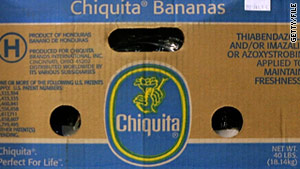 (CNN) -- A federal judge in Florida said Friday that lawsuits against Chiquita Brands International, filed by family members of thousands of Colombians who were tortured or killed by paramilitaries, will be allowed to go forward.

Chiquita, which has admitted to making payments to paramilitaries, had asked for the suits to be dismissed, arguing it was a victim of extortion and has no responsibility for any crimes armed groups committed.

"While the court allowed some claims to move forward, it is important to understand that at this stage of the proceedings, the court is required by law to treat plaintiffs' outrageous and false allegations as if they were true. Plaintiffs now have the burden of proving these allegations," Chiquita spokesman Ed Loyd said in a statement.

"Chiquita will vigorously defend itself against these false allegations and meritless claims," he said.

In 2007, Chiquita pleaded guilty and paid a $25 million fine for violating U.S. antiterrorism laws when it provided payments to the right-wing paramilitary United Self-Defense Forces of Colombia, known as the AUC.

Under the guise of protecting the Colombian public from leftist rebel groups, the AUC committed numerous human rights abuses, according to the U.S. State Department and Human Rights Watch.

The abuses included "the massacre of hundreds of civilians, the forced displacement of entire villages and the kidnapping of political figures to force recognition of AUC demands," then-U.S. Secretary of State Colin Powell said in 2001, when he designated the group a terrorist organization.

In their criminal case, federal prosecutors accused Chiquita of paying more than $1.7 million to the AUC in two parts of Colombia where the company grew bananas.

Chiquita has also acknowledged that it had made payments to the leftist Revolutionary Armed Forces of Colombia -- known as the FARC -- from 1989 to at least 1997.

The Cincinnati-based company had more than 200 banana farms in Colombia before selling them in 2004.

"The plaintiffs in this case lost family members, including sons who were banana workers or their mothers who stood up for their communities, as result of the conduct alleged," said Agnieszka Fryszman, an attorney for some of the plaintiffs. "They look forward to having their claims heard by a jury."