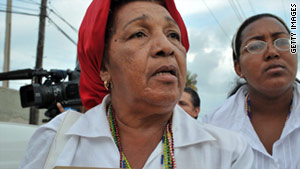 Havana (CNN) -- The mother of Orlando Zapata Tamayo, a political prisoner who died last year after a prolonged hunger strike, says she will continue to fight for democracy in Cuba after she emigrates to the United States on Thursday.

Reina Luisa Tamayo and 12 relatives will land in Miami as political refugees, taking the ashes of Zapata with them.

"This whole process have been very painful," she said as the extended family walked out of the U.S. diplomatic mission in Havana on Wednesday. "I have here with me the ashes of a martyr for democracy, the peaceful warrior Orlando Zapata Tamayo."

Zapata died in February 2010 after fasting for more than 80 days to demand better prison conditions. Fellow dissident Guillermo Farinas then launched his own hunger strike to demand the release of political prisoners.

Facing international pressure, Cuba eventually agreed to the biggest release of political prisoners in decades. More than 100 prisoners were freed as part of an agreement brokered by Spain and the Catholic Church. Many of them went into exile in Spain.

Cuba maintains that dissidents are mercenaries paid by Washington and other foreign governments to destabilize the government.

But Zapata's family said they were still routinely harassed and bullied when they marched to the cemetery in Banes every weekend to visit his grave.

Tamayo said that once in Miami she will "continue fighting for what Orlando Zapata so badly wanted for the people of Cuba: freedom and democracy."