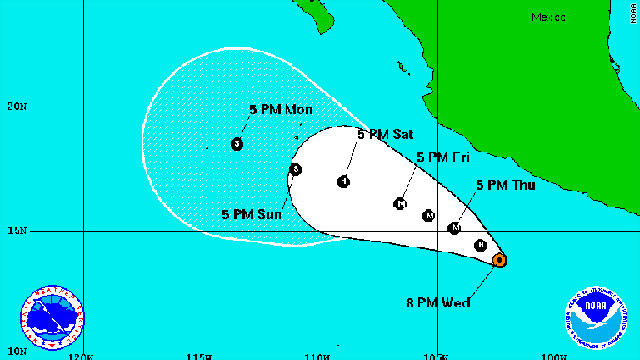 (CNN) -- Hurricane Adrian churned across the Pacific early Thursday as forecasters warned of dangerous surf and rip currents on the southwestern coast of Mexico.

Adrian -- a Category 1 hurricane -- could intensify into a major hurricane in the next day or two, the National Weather Service said.

The first hurricane of the season is expected to stay offshore, sparing Mexico.

But "any deviation to the right of the forecast track could bring tropical storm conditions" to parts of Mexico on Thursday and into Friday, according to the hurricane center.

The storm was about 275 miles (440 kilometers) south of the town of Zihuatanejo late Wednesday.

Swells caused by the storm were expected to affect the southwestern coast of Mexico.