21 bodies found outside of Mexican town 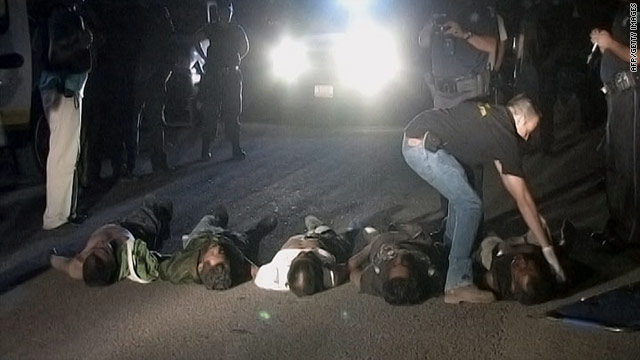 (CNN) -- Mexican authorities on Thursday are following leads on a grisly find from the night before -- 21 bodies, some with signs of torture -- strewn in five separate locations on the outskirts of Morelia, Mexico.

Some of the bodies had signs of torture, and other bodies not any, Michoacan state attorney general's office spokesman Jonathan Arredondo told CNN.

At least three bodies had bullet wounds and signs of strangulation, he said.

The bodies were found just outside several exits to the central Mexican city. Authorities found three piles of five victims each, and two piles with three victims each, Arredondo said.

There were notes found at each location, but authorities did not immediately reveal what they said or if any group claimed responsibility.

Despite the similarities at the five locations, Arredondo said it was still unknown if all the bodies were linked.

Morelia is the capital of the state of Michoacan, which is the territory of the violent Familia Michoacana cartel.

The cartel purportedly circulated a letter calling for a truce with authorities last December and January of this year. In the letter, the cartel accused the federal police of committing abuses in the region and blaming it on them.