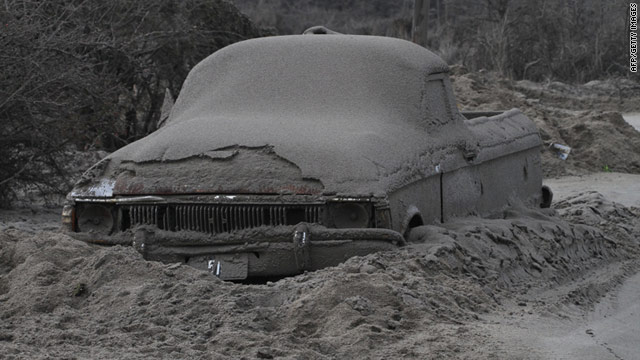 A vehicle is covered with volcanic ash from Chile in the Argentine province of Neuquen on Sunday.
STORY HIGHLIGHTS
RELATED TOPICS

(CNN) -- Thousands of people in southern Chile were told they could return home Sunday, some two weeks after a volcanic eruption forced them to flee.

Smoke and ash shot miles into the the sky when a volcano in the Puyehue-Cordon Caulle chain began erupting on June 4. Authorities evacuated more than 4,000 people from the area, according to the state emergency office.

"Fortunately, the volcanic activity has decreased and it is for this reason that we have decided to allow the people who were forced to evacuate to return to their homes," Interior Minister Rodrigo Hinzpeter told reporters.

Dramatic images of the eruption showed red, orange and gray plumes of smoke rising from the volcano, which is some 540 miles south of Santiago.

Ash from the eruption traveled around the world and disrupted flights as far away as Australia and New Zealand.

It also forced most airlines flying into Buenos Aires to cancel flights temporarily, and ash fell in the Patagonia region in southern Argentina. Local governments used machinery to clear the roads, which were covered with as much as 30 centimeters (about 1 foot) of ash.

Chile is located on the so-called "Ring of Fire," an arc of volcanoes and fault lines circling the Pacific Basin that is prone to frequent earthquakes and volcanic eruptions.