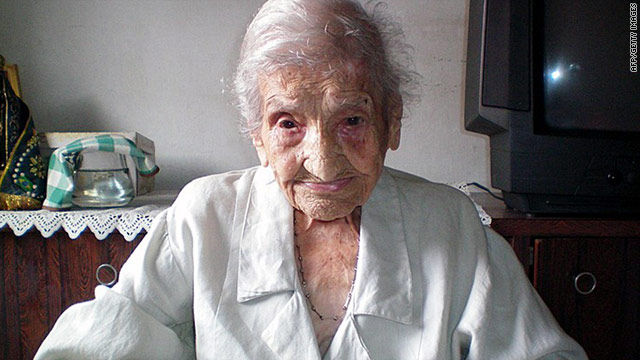 (CNN) -- A Brazilian woman ranked by Guinness World Records as the world's oldest person died Tuesday at the age of 114.

Maria Gomes Valentim was born in 1896 in Carangola, a city in southeast Brazil, where she lived her whole life. She was just weeks away from celebrating what would have been her 115th birthday.

Valentim died of pneumonia, according to the Gerontology Research Group, which keeps track of the world's oldest people.

With her passing, Besse Cooper of Monroe, Georgia, regains her title as the world's oldest. She was bested by Valentim in May when officials were able to verify the Brazilian woman's age. Cooper is 114 years and 229 days, according to Guinness World Records.

She credited her long life to a healthy diet, which included coffee, bread, fruit, milk with linseed and an occasional glass of wine.

Guinness World Records said Valentim was Brazil's first supercentenarian to get official recognition. A supercentenarian is anyone over the age of 110. There are fewer than 90 such people confirmed living in the world right now.

The oldest person to have ever lived, according to Guinness World Records, was Jeanne Louise Calment. She passed away in southern France in 1997 at the age of 122.