Mexican troops replace police in half a state that borders Texas 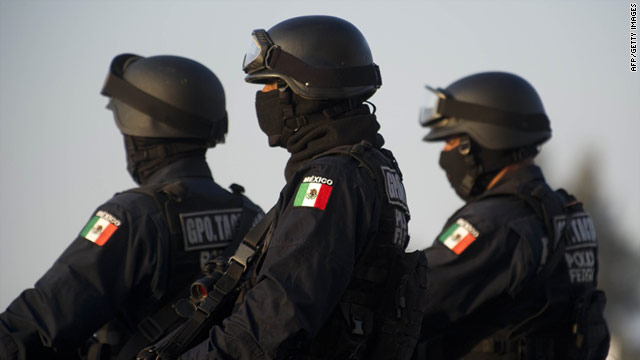 (CNN) -- Mexican troops fanned out across the border state of Tamaulipas this weekend, taking over security operations in half the state's cities and towns.

About 2,800 soldiers were deployed to 22 of 43 cities in the state, which borders Texas and is among the most violent in the country. The show of force came as President Felipe Calderon defended his drug war strategy in the face of mounting criticism from activists.

The soldiers took over policing duties in the state's largest cities, including the capital, Ciudad Victoria, and the border cities of Nuevo Laredo, Reynosa and Matamoros.

"The support is of temporary and extraordinary character," Mexico's ministry of defense said in a statement, but didn't offer details.

However, a municipal official in Nuevo Laredo told CNN that local police have been taken off the streets in the 22 cities while they are investigated for corruption. Crooked cops are among the biggest obstacles to combating the country's drug cartels. The official spoke anonymously due to the sensitivity of the subject.

In Nuevo Laredo, the military influx was so large that the soldiers couldn't find room in the city's barracks and had to lodge in two hotels, the official said.

Purges of police departments have been carried out before in an effort to cleanse the squad, but the official said he had "never seen such a large operation and so many soldiers here."

The government of Tamaulipas requested the help from the federal government, the Ministry of Defense said.

Other towns taken over by the military include San Fernando, where authorities found mass graves containing more than 200 bodies this year. They began finding the graves while investigating the kidnapping of passengers from a bus in late March.

San Fernando is also where last year, the bodies of 72 migrants from Central and South America were discovered at a ranch.

The Zetas drug cartel have been blamed for the mass graves and for the deaths of the migrants.

Nationwide, there have been some 35,000 drug-related deaths since President Felipe Calderon began a crackdown on the cartels in December 2006, the Mexican government says.

Ciudad Mier will also benefit from a military presence. It almost became a ghost town in 2010 because of a wave of violence that followed the killing of a Gulf cartel leader.

Mier, San Fernando and the city of El Mante will also be the locations for soon-to-be-built military installations.

The troop surge comes days after poet and activist Javier Sicilia met with Calderon to urge him to abandon his offensive against the cartels, which he blames for the violence that Mexico is witnessing.

Sicilia, who lost his son to the violence, is the leader of the Movement for Peace with Justice and Dignity.

Calderon apologized to the families of the victims of the violence, but defended himself at the meeting, and later, directly to the public through his Twitter account.

Calderon also mentioned the need to fortify institutions, such as police departments.

"To reconstruct institutions, we have to purge and strengthen police, prosecutors, judges, in all of the states and at the federal level," he tweeted.