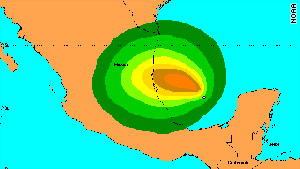 (CNN) -- A disturbance in the southern Gulf of Mexico has become a tropical storm and is expected to affect northeastern Mexico, the National Hurricane Center said Tuesday.

Tropical Storm Arlene is the first named storm of the 2011 Atlantic season, which spans June 1 to November 30.