From Luis Brito, For CNN 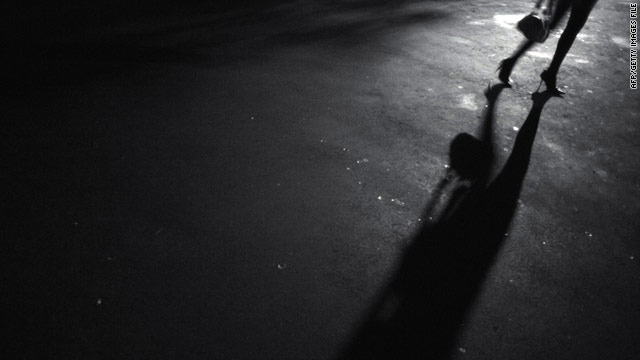 A 2010 file photo of a prostitute on the streets of Mexico City.
STORY HIGHLIGHTS

Mexico City (CNN) -- On an historic street just four blocks from the National Palace in Mexico City, scantily clad women marched in a circle for 12 hours a day, advertising and selling themselves for money they would never see.

The street, known as "La Pasarela," or "The Catwalk," is quiet now, thanks to an operation that freed 62 victims of a forced-prostitution ring, including two teenagers. But before, it was a hotbed of activity -- a center of sexual exploitation that prayed on the young and vulnerable.

"They were forced into this activity through threats and by the constant fear that their handlers would hurt them or their families, including their children," said Juana Camila Bautista, the city's prosecutor for sex crimes. "Of course (it's slavery)."

Five men and two women who police say ran the ring were arrested in May and are currently in custody pending an investigation into alleged human trafficking, pimping, corruption of minors and organized crime.

Many of their victims were women from poor, rural areas outside the capital. They hailed from such states as Oaxaca, Chiapas, Morelos, San Luis Potosi, Veracruz and Guerrero and were almost all under the age of 20. Two of the victims were teenagers, just 13 and 15 years old, authorities have said.

"They (the women) come from fairly poor backgrounds. Some might have a primary school education, others secondary. Still others don't know how to read or write," Bautista told CNN en Espanol.

Most of the young women were tricked into moving to Mexico City, she said, following promises of love and a better life.

Once there, they were forced to sleep with an average of 20 men per day and sometimes as many as 30. Clients paid between 100 and 300 pesos (between $9 and $26) for sex, depending on what services they wanted.

The women met their clients in tiny rooms, outfitted with a mattress, a trashcan and a curtain as a door. The victims were given quotas they had to meet and never saw a cent of what they earned.

"They were rigorously checked -- their clothes, shoes, bag -- to make sure they weren't left with a peso," said Bautista.

While an estimated 10,000 women are victims of human trafficking in Mexico's capital, there were only 40 investigations of the crime and three convictions in the city last year, according to a 2011 report.

Cultural norms and social stigma prevent people from realizing that many prostitutes lingering in dark alleys are victims, officials said as they presented the report from Mexico City's human rights commission. The study showed that most victims pass through, or end up in the capital, a sprawling metropolis of more than 21 million people.

Worldwide, an estimated 27 million people are victims of human trafficking, according to the U.S. State Department.